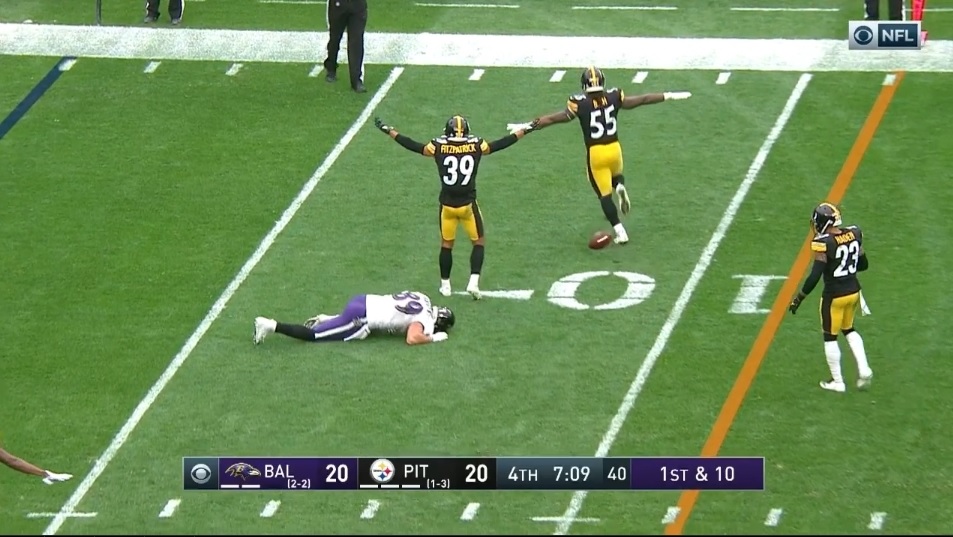 When the Steelers traded their potentially high first round draft pick to the Dolphins for Minkah Ftizpatrick, there was skepticism met around the league as to if it would be worth it. Not only was the ill-informed Quarterback argument brought up, but many questioned if Fitzpatrick himself was actually worth the capital that the Steelers gave up for him.

And after three games, Fitzpatrick has been worth that and then some. The Steelers have become a turnover creating machine since Fitzpatrick as entered the picture and that is no shock considering what they have been able to do on film to create confusion and turnovers on the defense.

Fitzpatrick has been rotated down into the box many times, but his downhill ability to bail out holes in defense has been invaluable. On the play action crosser to Mark Andrews, the defense flows away from Andrews, but Fitzpatrick makes a fantastic play to close on this ball and disrupt the ability for Andrews to haul this in at the catch point. The instincts to stay disciplined and the closing speed are fantastic. The Steelers have not had that on the back end for a long, long time.

With Lamar Jackson being the speed demon and running QB that he really is, the Steelers had to always be honest and disciplined to make sure that he did not bust any huge runs on their watch. The read option was an extremely credible threat, but Fitzpatrick does a great job of coming downhill to close. However, even more key is how he does flow towards the RB, and instead stays disciplined and reads through the mesh point rather than just reading through the linemen. The athletic ability of Fitzpatrick are great traits, but perhaps even more impressive is that football IQ.

The misdirection and read option type of plays that the Ravens ran with Jackson was all about trying to confuse the Steelers defense and allow Jackson to just outrun this defense to the boundary if he could. The ability of Minkah to just about stay step-to-step with Jackson with a great angle that cuts off the corner and boundary for Jackson is impressive. At many times, Fitzpatrick was a safety blanket on the back end and came downhill to hold Jackson to 3 or 4 yard gains, and with this type of ability, it is not a shock to see that.

Fitzpatrick rotates down here as a ‘buzz’ defender in order to give Jackson a different look and take away the middle of the field here. The Ravens had burnt the Steelers on a similar play with Andrews earlier in the game, but this time the middle is properly compensated for and the catch point is controlled by Fitzpatrick. There is an argument for some holding here, but Fitzpatrick is really making a physical play and using his leverage to get his hand in there. Overall, a great play to force a turnover.

Minkah Fitzpatrick has been worth the trade and then some. Even though the Steelers potentially passed on a top talent in the 2020 draft class, Fitzpatrick is a top tier talent in and of himself and they get him a year earlier. There are no regrets on their end, I am sure, especially with how this defense is looking right now.