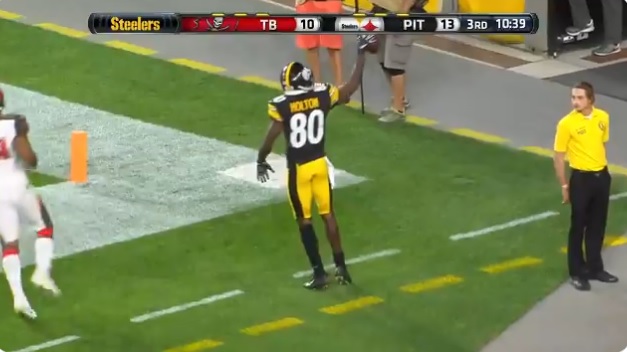 The Pittsburgh Steelers have signed WR Johnny Holton to the practice squad, the team announced moments ago.

Holton, who many hoped would land on the 53 after an impressive performance in the preseason finale, was part of the team’s initial cutdown to 53. For now, it seems the team is opting to carry just five receivers, which amounts to one of the biggest surprises of the weekend.

Holton’s proven to be a vertical threat with special teams value as a gunner and kick returner. He caught seven passes for 167 yards and one touchdown in the preseason, averaging over 22.3 yards per catch after averaging 19 yards a grab in training camp. The team originally signed him as a free agent after rookie minicamp ended. He spent three seasons with the Oakland Raiders.

The team now has a full, 11 man practice squad. Though if they are in the market for a tight end, more changes could happen. If the team goes after a tight end as has been heavily speculated, Zach Gentry may wind up on the practice squad with Kevin Rader released. Stay tuned.