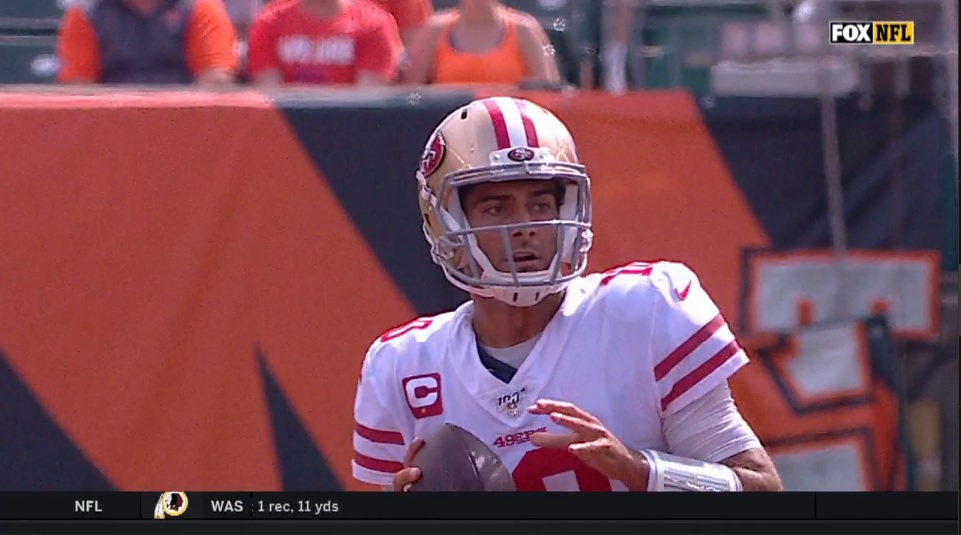 A run-focused offense, similar to what the Steelers saw last week against Seattle. Through two games, both wins, by the way, the 49ers are averaging 178 yards rushing (4th in the NFL) and a healthy 4.8 yards per carry. Even without Tevin Coleman, who appears to miss his second straight game, it’s a strong attack led by Matt Breida and Raheem Mostert. Those two combined are averaging an insane 5.7 yards per carry.

Their rushing attack as a whole has been good for several chunk plays. Their 13 rushes of 10+ yards rank second in the NFL. By comparison, the Steelers only have two such runs. Josh will talk more about their specific skillsets but both guys ran hard and have the ability to create when nothing is initially there. Steelers must tackle well this weekend.

Watch out for ancillary players running the ball too. Rookie WR Deebo Samuel has two carries this year and they’ll give him the ball on jet sweeps on 2nd down (occurred on 2nd and 9 and 2nd and 4). Both plays have been to the field. They’ll try to fake the jet too to avoid blocking the EMOL and run inside zone off it.

If the WR is running to the boundary, they’re probably not running the Jet. So consider it window dressing. If he’s motioning to the field, you gotta respect it. On fake jets to the boundary, they’ll throw a screen across to it, so you still can’t discount that player fully either. This offense is very layered, something the Steelers haven’t handled well over the years.

As was the case for all of 2018, no team uses a fullback more than the 49ers with Kyle Juszczyk manning that spot. He’s much more than a lead blocker, though he has just two touches in the first two weeks, but helps them in a variety of ways. Run game varies from inside zone to toss plays on the perimeter. Also like to run Counter Trey with the backside guard pulling, just as the Steelers do.

Ok, not entirely, and the 49ers have added plenty of weapons around him. He leads the team with 13 targets, catching 11 of them for 108 yards. Yet to find the end zone but had two touchdowns called back due to a teammate’s penalty. So he feels “due,” if that can be a thing.

They’ll get him the ball in a variety of ways. Like the Steelers have done, they’ll run a TE shovel, with option to hand it off, on 3rd and short. This is 3rd and 1. Check out the unusually wide split between RT and Kittle (#85).

Looking at the passing attack more broadly, they’re hitting big plays there too. Six different receivers have at least one reception of 30+ yards, including both running backs. Their eight completions of 20+ yards are top ten in football (the Steelers, for comparison, rank 21st here).

Jimmy Garoppolo is off to a nice start after missing most of last year with injury. A couple questionable decisions, throwing into quadruple coverage last week, but the overall numbers look nice. 67.3% completion rate, 8.9 YPA, four touchdowns, a pair of picks, and he’s been sacked only once. Of course, the offense will be without LT Joe Staley, turning to a rookie instead, so we’ll see how well their pass pro holds up.

Deebo Samuel is the only other consistent weapon in the passing game. He and Kittle are the only two guys with 5+ catches. But others have made big plays. 49ers like to use playaction for their vertical game and hide their players well. Check out this “Z Leak” with Marquise Goodwin, releasing out of the chaos for this big play.

And this trick play, a 16 yard pass from WR Dante Pettis, should look familiar to Steelers’ fans. Page out of the Pats’ playbook.

Kyle Shanahan is a great offensive mind and with Keith Butler at DC, the Steelers are at a coaching disadvantage heading into this one.

It’s a tough trip to the West Coast to take on 2-0 San Francisco as the Steelers come in at 0-2 searching for their first win of the season in Mason Rudolph’s first career start in the NFL.

Through the first two weeks, San Francisco’s offense has looked explosive under head coach Kyle Shanahan, coming into the Week 3 matchup as a top 10 offense in total yards per game and points per game. With a healthy Jimmy Garoppolo back under center, San Francisco has looked sharp through 2 weeks of the season.

When watching the 49ers so far on tape, it’s clear what a great job Shanahan does with his scheme, knowing what to dial up and when, putting his guys in the best positions possible to succeed snap to snap.

There are not a lot of big names on San Francisco’s offensive roster outside of Garappolo and all-world tight end George Kittle, but there are a number of guys that know their role and succeed at a high level.

Against the Cincinnati Bengals in Week 2, Shanahan dialed up the perfect play-action pass against the Bengals for speedy wide receiver Marquise Goodwin.

Watch everyone flow left on San Francisco’s offense except for All-Pro caliber fullback Kyle Juszczyk, Garappolo off the play-fake, and the backside wide receiver. Keep an eye on the jumble of bodies on the bottom of the screen though.

That’s Goodwin leaking out wide open down the field for the touchdown. That’s a great design and a great call, all with play-action sprinkled in.

Goodwin was really good a few years ago, but he’s regressed back to the mean over the last few years. However, he’s still a valuable weapon for the 49ers’ offense.

One guy who’s really emerged this season is slot receiver Richie James Jr., who has become a real homerun threat with the football in his hands. He’s a deep threat on routes, and can make plays happen after the catch. Against the Bengals in Week 2, he had a long catch down the left sideline called back, but in Week 1 against the Tampa Bay Buccaneers, James won consistently out of the slot, which has been a problem area for the Steelers.

That’s a crafty route for a receiver that was considered super raw coming out of Middle Tennessee State a few years ago. He has ridiculous long speed and can shake loose in tight areas, much like we saw here. James is starting to get more and more snaps each week as Garappolo and Shanahan develop more trust in him.

Outside of James and Goodwin, San Francisco’s wide receiver room has some depth, but they’re still waiting on 2018 draft pick Dante Pettis to round into form, while 2019 second rounder Deebo Samuel has been up and down through 2 weeks.

Make no mistake about it though: this passing attack runs through Kittle.

He can win lined up on the line, in the slot, out wide…just about anywhere.

Kittle might be the most snake-bitten player in football the last two years though when it comes to big plays being wiped out by penalties.

One thing I saw on film a lot when watching San Francisco’s use of Kittle is the designed safe throws for Garoppolo on rollouts. Kittle is often the safety blanket because he’s sure-handed and can make things happen after the catch.

Plays like this one below are a staple in the 49ers’ offense.

The 49ers love to run play action, getting linebackers firing downhill while trying to slip Kittle out into the flat. This is just too easy for Garoppolo and Kittle. Expect to see it a few times on Sunday.

Not only is Kittle a terrific receiving threat, he’s an elite blocker as well, which allows the 49ers to have great balance offensively. They’ll motion him all over the formation and use him as the lead blocker on tosses, traps, powers, etc.

Against the Buccaneers in Week 1, the 49ers motioned Kittle across the formation left to right deep in their own end. That allowed the Niners to run the toss right with Kittle kicking out one defender, opening up a lane for Juszczyk and running back Tevin Coleman to power through for a sizeable gain before giving way to Raheem Mostert after getting hurt.

Speaking of Mostert, he’s paired with Matt Breida to form a terrific duo in the backfield through 2 weeks. Breida is super underrated in this league. He’s a power back that runs well behind his pads, but also has a ton of wiggle to his game that seems to get overlooked.

Poor William Jackson III. I bet he hopes this clip rarely sees the light of day moving forward. That’s just incredible from Breida, not only to make Jackson III miss in a phone booth, but also have the wherewithal to cut back to the left after the juke to cap off the splash play.

If the Steelers don’t tackle well on Sunday, Breida will be in for a monster day.

Breida is most definitely the bell cow on the ground, while Mostert is the dual threat guy with Coleman down with an injury. Mostert has had a couple touchdowns called back due to penalties as well. He’s exceptional running screens in Shanahan’s system and has a knack for winning races to the edge.

Along the offensive line, losing Joe Staley to a broken fibula is a massive blow for the Niners as rookie Justin Skule has to start in place of the All-Pro talent. Aside from the loss of Staley, this has been a pretty solid offensive line through two weeks.

Left guard Laken Tomlinson has really turned his career around after being a bust in Detroit, while center Weston Richburg is back to his All-Pro level play after battling injuries the last few years. He’s been arguably the best player up front for San Francisco.

Right guard Mike Person and right tackle Mike McGlinchey have formed a mauling duo on the right side for the 49ers. When they have success running the football, it’s most often to the right side of the offense.

On special teams, San Francisco is pretty solid in the kicking game with veteran kicker Robbie Gould holding it down on field goals and extra points. Rookie punter Mitch Wishnowsky can be a real threat for San Francisco moving forward. He has a monster leg and can really flip the field. Not only that, he has great ball placement too with impressive touch. Aussie kickers are the new wave.

James will likely handle both kick and punt return duties with Pettis sprinkled in at punt returner. Both are electrifying with the ball in their hands in the return game. The Steelers can’t afford to mess around on special teams this week.