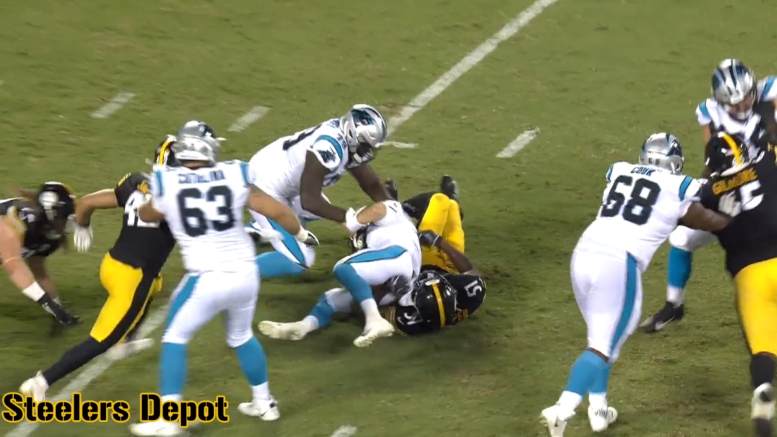 Being a player on the fringe of the roster comes with it a necessary humility, but that which Tuzar Skipper displayed last night following the Pittsburgh Steelers’ final preseason game certainly seemed to come from somewhere within, and not driven by circumstance.

The rookie undrafted free agent has been arguably the best defensive player on the roster relative to his competition level, and perhaps among the best around the league this preseason. He finished the exhibition period with five sacks, more than anybody has had in five years in the NFL. Two of them produced fumbles.

But he doesn’t care about the numbers. He cares about playing.

“That’s the most important thing, really, so I can’t really care less about all the other things like that. Sacks, statistics, anything like that, no. I like putting on the Steeler uniform and going out and playing football”.

Skipper is yet another player from the MAC conference, one of three from the Toledo Rockets, including fellow outside linebacker Olasunkanmi Adeniyi. Adeniyi made the 53-man roster with a similarly strong preseason a year ago. Third-round rookie wide receiver Diontae Johnson was also teammates with the pass-rushing duo.

He knows special teams is where he needed to help himself, and while he didn’t play a lot, he made his time there count, registering two tackles on kickoffs on limited snaps. about his willingness to play in that capacity, he said, “I’ll do anything to help this team win. Anything, it doesn’t matter. You want me to be a janitor? I’ll be a janitor. It doesn’t matter”.

Hopefully he doesn’t have to sweep up any floors inside of Heinz Field or the UPMC Rooney Sports Complex any time soon, but the offer is still nice to have on the table. But the truth is that even if the does make the roster, when the team is at full health, he’ll most likely be in active on Sundays.