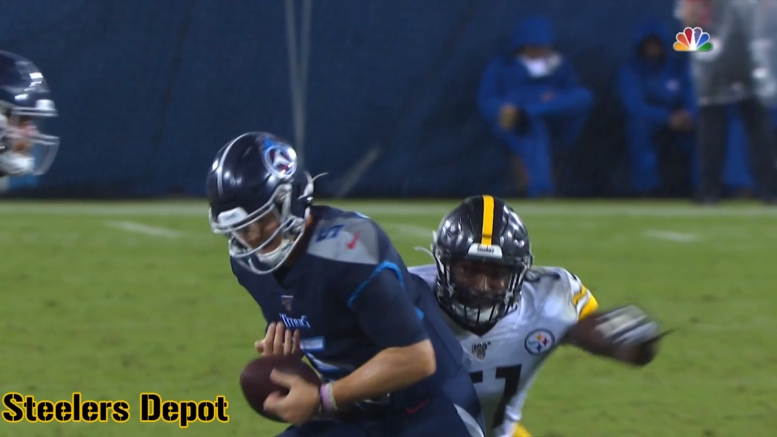 I still don’t know exactly how the numbers would work out, but through three preseason games, there is no denying that Pittsburgh Steelers rookie Tuzar Skipper is very much playing his way into the conversation with respect to making the 53-man roster. As a rookie minicamp invitee out of the MAC conference at the outside linebacker position, he needed to make an impact, and he has.

Skipper, the former Toledo teammate of last August’s pass-rushing standout, Olasunkanmi Adeniyi, has recorded a sack in each game so far, retaking the team lead in sacks from Bud Dupree, who had two of his own last week. Skipper’s sack against the Tennessee Titans earlier tonight also forced the ball out, coming against third-string quarterback Logan Woodside.

But he wasn’t just making a difference on the pass rush. He also recorded three additional tackles, all of them defensive stops, including one in the backfield for a four-yard loss. He has shown much of what Adeniyi did last season, able to play on the edge in both phases, rushing and passing.

The perpetual question for players in his position, however, is whether or not he can contribute on special teams, and at least at first blush it doesn’t look like he got any more opportunities in that area this week, especially with fellow rookie Sutton Smith active for the first time and playing there.

Many are assuming that Skipper is primarily competing for a roster spot with another rookie, inside linebacker Ulysees Gilbert III, who has also played above the line defensively through the first three weeks. In fact, Skipper and Gilbert have consistently been the two players that have stood out in the second halves of games.

How well does an outside linebacker have to play while not contributing on special teams in order to climb onto the back end of the 53-man roster? It seems as though the rookie Rocket is trying to find that out, and he is pushing, getting close.

I would expect him to see a highly extended amount of playing time in the preseason finale against the Carolina Panthers, and that will hopefully include time on special teams as well, at least playing on the coverage units for punts and kicks.

He has done about all he can on defense so far, showing clearly that he is capable of both making a splash and doing the dirty work that must be done on a play-to-play basis. The problem is that the Steelers seem to be unusually deep this year.

In order to carry both Gilbert and Skipper, barring the unlikely release of either Tyler Matakevich or Anthony Chickillo, or Adeniyi starting on the Reserve/Injured List (which would require one of them to be released anyway), another position will have to suffer.

That would likely mean the carrying of only eight offensive linemen, probably at Fred Johnson’s expense, or five wide receivers, possibly even going to just nine defensive backs. But considering they consistently carried 11 last year, his best hope of making the team is probably to trim the offensive line room.