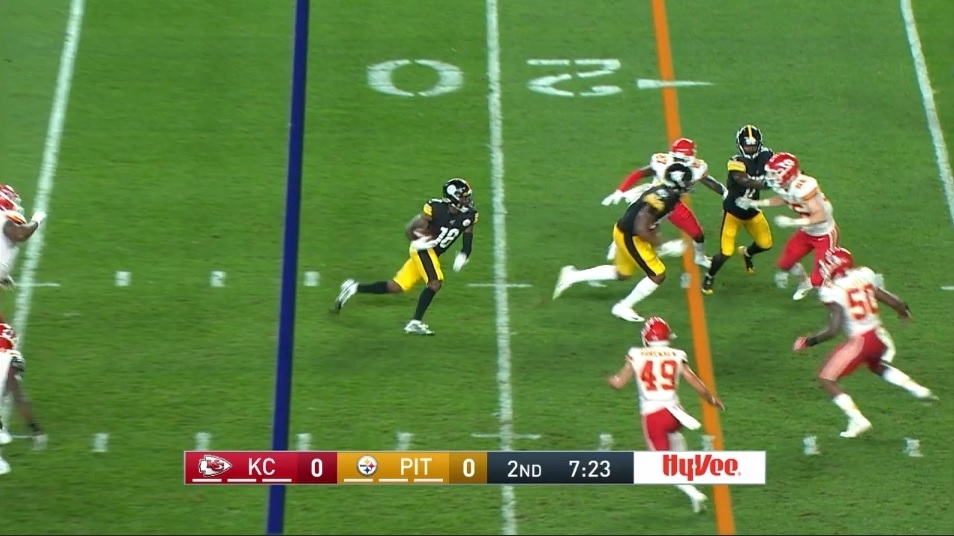 Throughout the season follow each game I will be taking a look at the Steelers rookies and how they fared each week.  This will consist of thoughts such as the positive and negatives from that game, areas to watch or work on and clips to support what I’m sharing. Hopefully, this will shed some insight on some things you may or may not have seen.

Devin Bush/ILB – Did not play (shoulder)

Diontae Johnson/WR – Made his preseason debut and didn’t disappoint. He showed the quickness to release as we have talked about, his route running was top notch and made nice adjustments on two deep ball one that resulted in a touchdown.  He did look a little shaky on his punt returns. He fumbled one and stumbled on another.  I felt it looked like he was just trying to do too much. All good signs otherwise so far for Johnson

This route was pretty. He presses out to widen the DB, plants and cuts inside and the DB tries to undercut thinking its and inside route. Nope, back outside by Johnson and looks at the separation.

Justin Layne/CB – Showed solid work as a gunner on punt return. Got down there quickly and had a chance at a tackle that spun the returner backwards. He played later in the game on defense and played much more in his comfort zone in Press coverage. His coverage was good and rarely tested but did get a pass break up on the last play of the game.

Here is that last play. Open up to the outside but turns quickly to stay in position and it looks like he gets his left hand in to knock it away.

Benny Snell Jr./RB – Didn’t produce a lot of yards on the ground but showed up well in other aspects. He displayed good awareness in pass protection to work across the formation and find the free rusher. Caught a couple passes one where he was hit immediately and the other a solid gain. Made a tackle on special teams and as Dave documented here he did a very nice job on short yardage plays. Would like to see a little more pop on his chips on the edge.

Zach Gentry/TE – Did not play (unknown)

Sutton Smith/OLB – Did not play (abdomen)

Isaiah Buggs/DL – Another good performance for Buggs. He’s playing with his eyes up with good awareness of where the ball is.  Showed a good anchor holding his ground on double team blocks and was able to shed one on one blocks to get in on tackles.  He uses a solid outside club when rushing the passer and gets his hands up when he can’t get to the quarterback

Ulysses Gilbert III/ILB – He came back down to earth a bit after his impressive week 1 performance playing earlier in the game against better competition.  He seemed to be a bit hesitant versus the run allowing OL to come out to him seemingly slow to process the play and maybe thinking too much. That’s okay. He’s a rookie there will be growing pains. Like I said about Layne last week, I want to see how he responds physically and mentally this week. He did look good in coverage. Seemed to understand his assignments and even showed his speed running with Mecole Hardman up the seam.

Derwin Gray/OG – When run blocking he was popping up instead of out, was dropping his head at contact and wasn’t very quick pulling to the left taking a shallow angle and running into the back of the tight end. Could have been a good gain had he gotten outside. Looked more comfortable in pass protection but did give up pressure to the inside where he may have over set to the outside.

Devlin Hodges/QB – Continued to open some eyes.  Has a good feeling in the pocket to sense where the defenders are while keeping his eyes downfield.  Has good touch and accuracy from a clean pocket, on the move or shuffling to create space.  On the touchdown to Johnson he hung in there with two defenders closing in while putting the pass in place to give Johnson a chance.

Fred Johnson/OG – Felt he was bending too much at this waist getting out over his toes. He could drop his hips a bit more to improve his balance and strength.  He showed the ability to reset his anchor versus power rushes. Had a couple of nasty blocks in row including him winning the low leverage battle on a double team block on 4th and 1. Really like watching him pull. He clears a path and I swear I thought I saw him smiling on one pull probably thinking about what he was going to do to the Edge.

Tuzar Skipper/OLB – Versus the run I liked his discipline on the edge reading the play through the mesh point before committing to the runner. Also saw him reset the edge on a run his way driving the RT back 2 yards forcing the play inside. Good awareness on the fumble recovery to work around the pile to come up with another sack and looked good as the looper on a stunt coming off the hip of the DT to get pressure up the middle.

Here is the sack. Good get off at the snap and uses a swat/rip combo with good bend around the edge.

Trevor Wood/TE – The forgotten man of the TE group had a decent showing. Sometimes its hard to get noticed without showing up in the box score but he looked open on a post and deep in on balls throw deep downfield to other receivers. I really liked his aggressiveness as a run blocker showing good push to move DE’s off the LOS and DT on down blocks. Got a few extra snaps with two TE’s out and tried to make the most of them.

Yep, a blocking clip. Wood is the H back on the right side. The play is designed to go inside. He gets his head across and drive the DE 2-3 yards off the LOS.

Dravon Askew-Henry/S – Was targeted often playing in the slot and gave up a few receptions.  Did a nice job in press not letting the WR of the line on one rep and had a chance at an interception vs a curl route that he probably should have caught. Also had another missed tackle.

Ian Berryman/P – Had a couple punts that he tried to control after blasting one last week averaging 36 yards with one inside the 20.

Garrett Brumfield/OG – Only three plays and not much to talk about. Pulled right on one play and got no movement on the defender.

P.J. Locke/S – Good read and react on an out route by the RB showing good speed to get to him before the first down marker and making sure the pass wasn’t caught with a nice pop. There was a rep on a run play he came down hill quickly but overran the ball carrier.

Trevon Mathis/CB – Didn’t get a chance to play on defense with only two reps on special teams.

Travon McMillian/RB – Played three plays and had two carries for minus one yards. No room to run and was basically just protecting the ball.

Damian Prince/OT – Three plays late in the game didn’t get push on the running plays and his hands were late in pass protection forcing him to reach out and grab the rusher.

Matthew Wright/K – Made good on his lone field goal from 46 yards out.