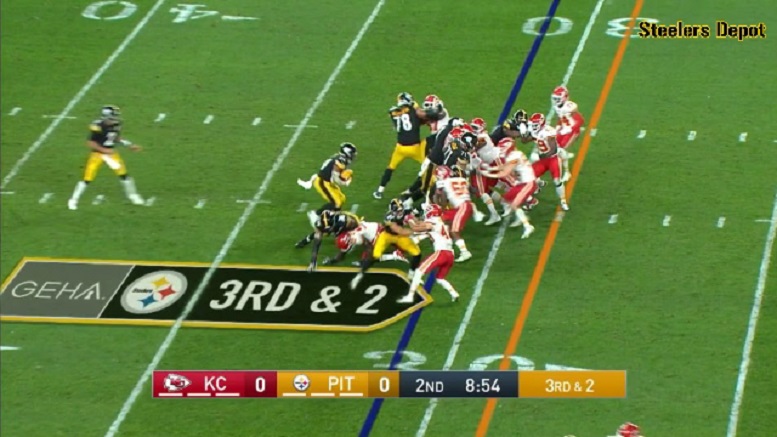 Statistically speaking, there hasn’t been a lot to get excited about through two preseason games in regard to Pittsburgh Steelers rookie running back Benny Snell Jr. After all, Snell, the team’s fourth-round draft pick this year out of Kentucky, has carried the football 20 times for 42 yards, an average of just slightly over 2 yards per rush. While those stats aren’t great, Saturday night against the Kansas City Chiefs we saw Snell excel some in an area that he also excelled in during his college career at Kentucky and that’s short-yardage situations.

As I pointed out in a post not long after the Steelers drafted Snell, the Kentucky product registered a 71.8% successful play percentage during his college career on 3rd down runs in which 3 or less yards were needed. That solid success rate also came via 78 total attempts. Against the Chiefs Saturday night, Snell was given four short-yardage carries and he was 3-of-4 on those with one success being wiped out and thus not counting because of a penalty. Below is a quick and dirty look at those four short-yardage attempts that Snell had against the Chiefs.

Snell’s first short-yardage attempt Saturday night came out of 22 personnel and was an ISO lead run with the running back following fullback Roosevelt Nix. The blocking on the right side by guard Matt Feiler and tackle Chukwuma Okorafor was quite on this run and Nix did his job of providing a nice crease for Snell. The result was a 3 yard gain and a first down.

Shell’s second short-yardage carry Saturday night came up short, according to the spotting of the football and subsequent measurement. It also didn’t help that Steelers center Patrick Morris and wide receiver James Washington both did poor jobs with their respective blocking assignments out of 11 personnel. Those missed blocks and all, Snell still managed to get back to the original line of scrimmage and quite honestly, it looks like he received a bad spot based on what the television angle shows us. Regardless, it was deemed short and a 4th and 1 situation followed.

The ensuing 4th and 1 was also another short-yardage carry for Snell out of 11 personnel and it might have been his best effort of them all despite it not ultimately counting. After wide receiver Ryan Switzer misses his block, Snell was able to spin out of a tackle attempt on his way to picking up 4 yards. That run was wiped out, however, by a holding call on Steelers tight end Kevin Rader.

Snell received one more short-yardage carry Saturday night against the Chiefs and it also came on a 4th and 1 play. This time it was out of 12 personnel with both tight ends lined up on the right side of the formation and both wide receivers on the left. At the snap, Snell takes a quick hop to his right and then proceeds to cut back to the left side where he finds a nice lane provided by the great blocking of Washington and tackle Zach Banner. The run was good for 4 yards and obviously a first down.

So, will Benny Snell Football in 2019 be mostly Benny Snell Short-Yardage Football? It’s hard to know the answer to that question right now but it wouldn’t surprise me if Snell winds up cutting his teeth initially as a short-yardage back during his rookie season.

What does starting running back James Conner think about Snell possibly developing a role as a short-yardage back in 2019? Sure sounds like it.

“Yeah, man, if he’s hot keep giving it to him,” Conner said after the Steelers game against the Chiefs, according to Mike Prisuta of steelers.com. “It’s going to take all of us. Benny’s built for it.”