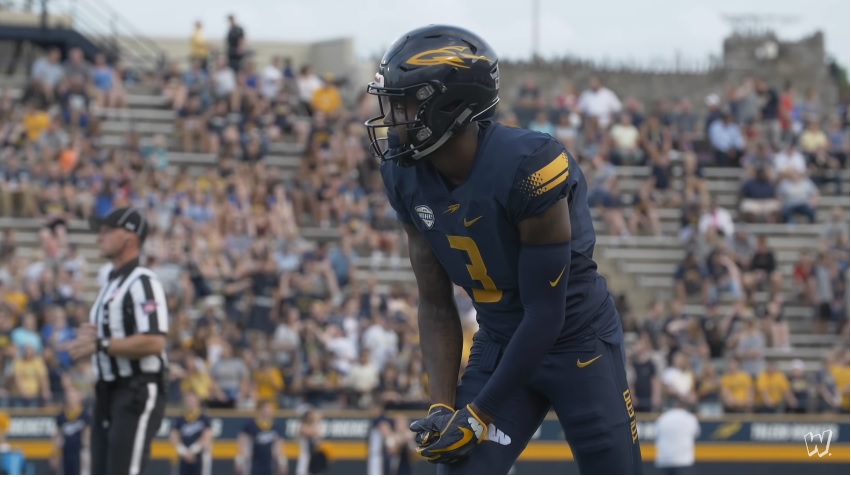 here is a lot that goes into playing wide receiver. Route running, being able to adjust to the ball and gaining yards after the catch are all important factors.  Before any of that happens they have to be able to get off the line of scrimmage. I wanted to take a look at Pittsburgh Steelers wide receiver Diontae Johnson (#3) and his Toledo tape and review how effective he can be against press coverage.

Teams in the MAC varied their coverage verses Johnson but didn’t play a lot of Press.  However, an early 2018 matchup vs Miami (FL) allowed a look into what he could potentially do with a defender in his face.

Start with his stance. For the most part he is consistent in his alignment lined up in a balanced stance with his inside foot forward with his hands either placed on his leg or dangling at his sides. More on his hand placement later but balance is the key here and allows him to use his quickness in any direction to beat the jam.  Here are a few examples a full speed and then at ¾ speed to get a closer look

Lined up at the bottom of the screen he brings his back foot up even coming to balance with a slight jab to the outside. He gets the DB, Dallas Cowboy draft pick Michael Jackson (#28),to lean to the outside. Johnson uses his right hand to push away Jackson’s right hand leaving him grasping at air.

Lined up at the bottom of the screen again vs Jackson he takes a half step forward, uses a slight jab to the inside to set up the quick acceleration to the outside while swiping the outside arm down to gain the advantage.

Lined up at the bottom of the screen here is a similar move to the first one with a jab to the outside and acceleration inside. He gets Jackson to step forward with his inside foot looking for an outside release. When Johnson breaks inside the DB complete misses with his jab.

This was my favorite move.  He’s lined up at the top of the screen. At the snap he pauses to let the DB Trajan Bandy (#2) make the first move. The DB goes for the jab and Johnson leans back slightly, swipes the jab to the inside and is 3 yards by the defender in a blink. Unfortunately the QB missed out on a TD by throwing to the other side.

Vs Western Michigan in the red zone he’s lined up to the bottom of the screen. This isn’t Press but the ability to manipulate the DB near the LOS is really good. With the DB off a step his first movement is forward. He uses a stutter step to press to the outside. As soon as he gets the defender to drop his outside foot and open his hips, he’s got him and breaks to the inside and makes the easy catch on the slant.

Getting back to his pre snap routine on the LOS, ideally you want each rep to look the same. You don’t want to give defensive coordinators any advantages by showing a tell. Remember when there was talk of Antonio Brown only adjusting his gloves on passing plays? Johnson’s alignment is generally the same except for his hands so I reviewed if there was something to it.

Over the course of 3 games I kept track of his hand placement and whether it was run play or a pass play. I excluded any plays where he was in motion, fidgety before the play (pointing out defenders, adjusting gloves) or any plays I was difficult to determine definitively where his hands were.

I don’t know if those percentage are high enough to indicate a trend whether it’s a run or pass play but it’s worth keeping an eye on and maybe we could let WR Coach Darryl Drake know just in case.

This is a small sample size but there is a lot to like from what I see.  He understands how to manipulate defenders and get them to open up their hips and shows good hand usage to keep defenders hand off of him. This does not guarantee success vs NFL defensive backs but it’s good to see the foundation is there giving him something to build upon.