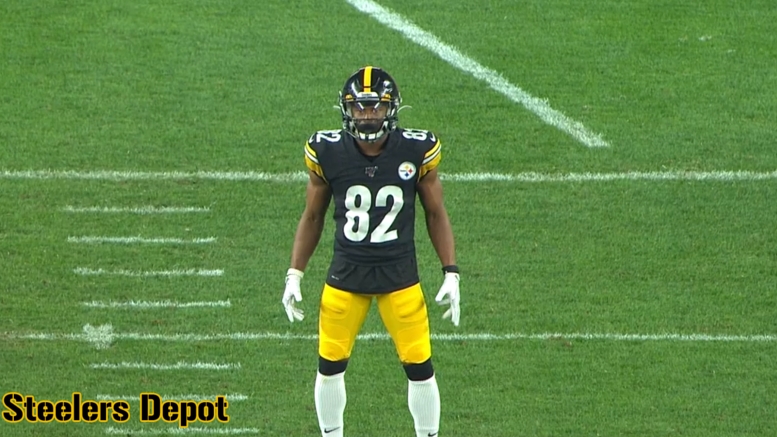 One of the most difficult means of making a 53-man roster, particularly with today’s rules, is trying to do so as a return specialist. While first-year wide receiver Diontae Spencer is not purely a returner, that is where his biggest contribution would figure to be if he were to make the Pittsburgh Steelers’ roster in 2019, likely as the number six wide receiver.

The veteran of the Canadian Football League had two strong returns last week, one on a punt and another on a kickoff. He followed with a great punt return in yesterday’s victory over the Kansas City Chiefs, racing 38 yards up the left sideline and breaking multiple tackles along the way. He also had an 11-yard punt return a short time later in which he displayed the ability to make the first guy miss.

But those chances did not come until the second half, with rookie wide receiver Diontae Johnson, making his debut, getting the first shots at the role. Johnny Holton also handled kick returns before Spencer got any chances.

Head Coach Mike Tomlin was asked after yesterday’s victory if Spencer’s efforts over the course of the first two weeks had, or would, earn him the right to ascend up the depth chart at the returner position. He had a very simple and direct answer: “no”.

That was the sum total of the exchange, but that is the reality of the job, and the role within today’s game. Unlike last week, Spencer did not get any targets in the passing game, but he did get the opportunity to execute one reverse, on which he showed the sort of skills that would convert well to the return game on a 19-yard play.

I think at this point it’s clear that if Spencer going to make the team, then it’s going to happen in the fourth preseason game. If he didn’t get any targets in the passing game last night, he’s going to have a hard time finding any in the third preseason game as well.

Given the infrequency with which kickoffs are even returned—Ryan Switzer returned 30 last year, and that was, I believe off the top of my head, the fourth-most in the NFL, with nobody in the league having more than 40 returns. In other words, even in the best-case scenario, you’re going to have fewer than three shots per game to return a kick, and more likely, fewer than two.

Punts? Even scarcer. Switzer also returned 30 punts last year, and that was the second-most in the NFL. Tarik Cohen had 33 punt returns, the only player in the NFL to average at least two punts per game in the 2018 season.

So even if Spencer were to ascend the returner depth chart in the preseason, it would still give him at best an incredibly slim chance of making the team. He needs to catch a couple of deep balls, at least, and he may have already (literally) dropped his best chance to make an offensive impact during the first preseason game.