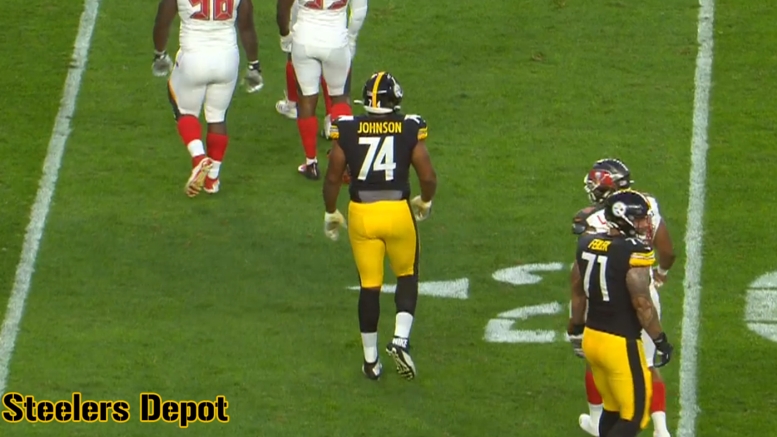 The Pittsburgh Steelers, slowly but surely, are looking to turn their fortunes around with respect to finding some keepers among the college free agents that they find after the draft. Last season, two rookie undrafted free agents made the 53-man roster in Olasunkanmi Adeniyi and Matthew Thomas, though only the former finished there or remains with the team.

This season, the team has a few interesting college free agent rookies who are doing their thing in training camp, and through the first preseason game. But the one who has the best, and clearest, shot to a spot on the 53-man roster is mammoth Florida guard Fred Johnson, who at 6’7” has more size than the average starter along the interior offensive line.

Johnson was signed as a priority free agent—he was graded as having late-round potential—and has pretty consistently been with the second-team unit throughout the offseason process. Due to rest and injuries, he started at right guard on Friday against the Tampa Bay Buccaneers and played nearly the whole game there.

It’s that sort of opportunity that makes the rookie very happy with the decision that he made to sign with the team. “Looking back on it now I made the best decision I could have possibly made” in choosing the Steelers after the draft, he told Chris Adamski late last week.

“Being undrafted, it turns out, was the best thing that could have possibly happened to me”, he added. “I felt like it put a fire under me that I needed. It humbled me a lot”.

It’s not uncommon for players in a similar position to feel that way. Johnson is a player who was seen to have a lot of talent and potential, but simply was not putting it all together, perhaps simply because he was not taking the game seriously enough to reach his full capabilities.

As you might recall, it didn’t take him long at all to get noticed. 11th-year veteran guard Ramon Foster—another former undrafted free agent who chose to sign with the Steelers following the 2009 NFL Draft, 10 years ago—pointed to Johnson and fellow undrafted free agent Garrett Brumfield as early sleeper candidates.

It’s easy to speculate what he and his agent might have been thinking in signing with the Steelers. They have one of the top offensive lines in the league, with good depth, but they also have an established history of giving opportunities for upward mobility to undrafted free agents at the position.

While Foster is the poster child for that cause, they also have a Pro Bowl left tackle who was undrafted in Alejandro Villanueva. Matt Feiler, another former college free agent, took four years to make a roster, but figures to be the starting right tackle entering his third season. And then there’s B.J. Finney, as well, a top backup and ‘starter in waiting’.