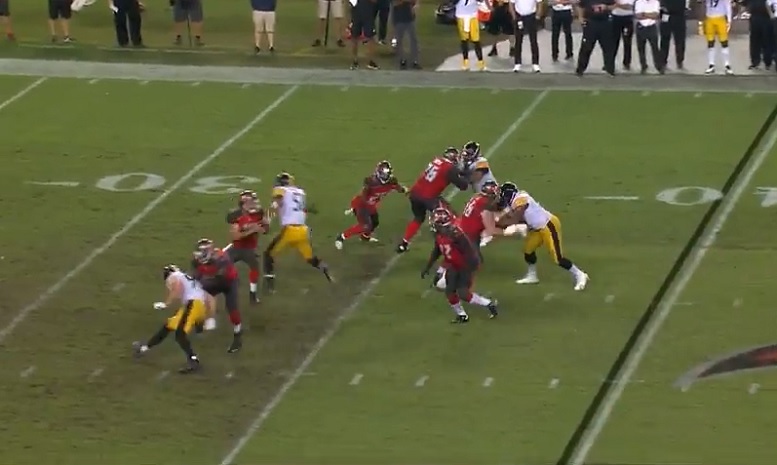 With Pittsburgh Steelers outside linebacker Bud Dupree claiming a few times this offseason that he missed out on quite a few sacks, I figured I would use Friday to back-check him and you can read the findings here. With Dupree’s claimed “missed sacks” of 2018 now completed, I figured it’s only fair to go through all 16 of the Steelers 2018 regular season games to find and contextualize each of the “missed sacks” of all players. To do so, I will need to go game-by-game and then post my findings in a multi-post series.

On this 1st and 20 play in the second quarter of the Steelers Week 3 road win against the Buccaneers, Bostic came on a blitz and the Tampa bay right guard did a horrible job of recognizing him coming. Bostic was allowed a free run at Buccaneers quarterback Ryan Fitzpatrick and he flew right past him with a seemingly needless jump. Fitzpatrick ducks the inside linebacker and then escapes the pocket to the left of center for what ultimately would be a gain of 4 yards. For what it’s worth, Bostic did register a sack of Fitzpatrick a few plays later. Even so, the Buccaneers offense still manage to drive the field and ultimately settle for a field goal.

On this 2nd and 21 play to start the fourth quarter against the Buccaneers, the Steelers defense once again blitzed Fitzpatrick. The deep drop by the Buccaneers quarterback combined with a nice win around the edge of the right tackle by Watt, resulted in the Steelers outside linebacker having a shot at a sack. However, Watt’s dive at Fitzpatrick’s lower legs came up empty and the Tampa Bay quarterback then escaped the pocket to his right and ultimately connected on a pass to a wide receiver for a gain of 8 yards. Interesting enough, Steelers cornerback Mike Hilton suffered a hyperextended elbow on this play while attempting to tackle the receiver along the sideline. The Buccaneers drive also eventually converted on 4th down two plays after this play and the drive later culminated in a touchdown.