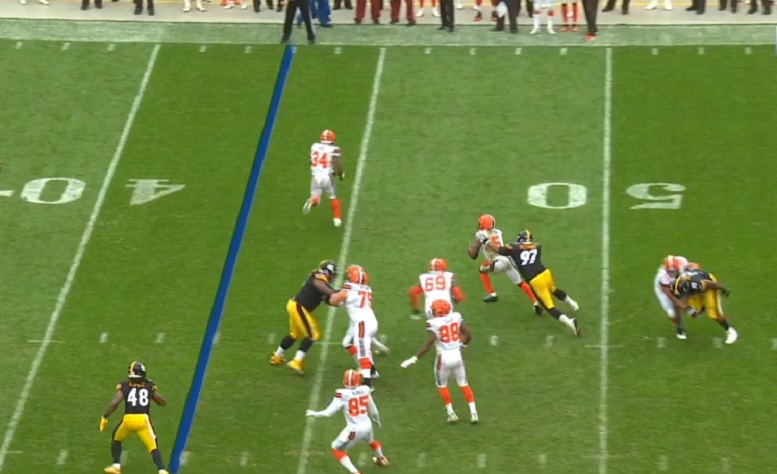 With Pittsburgh Steelers outside linebacker Bud Dupree claiming a few times this offseason that he missed out on quite a few sacks, I figured I would use Friday to back-check him and you can read the findings here. With Dupree’s claimed “missed sacks” of 2018 now completed, I figured it’s only fair to go through all 16 of the Steelers 2018 regular season games to find and contextualize each of the “missed sacks” of all players. To do so, I will need to go game-by-game and then post my findings in a multi-post series.

We’ll kick this series off with a look at the Steelers missed sacks in their Week 1 game against the Cleveland Browns. In total, there was only one legitimate missed sack in that game and it belonged to defensive lineman Cameron Heyward.

On this 2nd and 10 play in the second quarter of the Steelers Week 1 road game against the Browns, Heyward split the left tackle and tight end on that side right after the snap of the football and then all that’s left is to corral Cleveland quarterback Tyrod Taylor. While Heyward is able to get his hands on Taylor two yards behind the original line of scrimmage, the Browns quarterback is able to power forward for 3 yards before the Steelers defensive lineman can get him on the ground. The play resulted in just a 1-yard gain, but it could have and should have been a sack for Heyward.