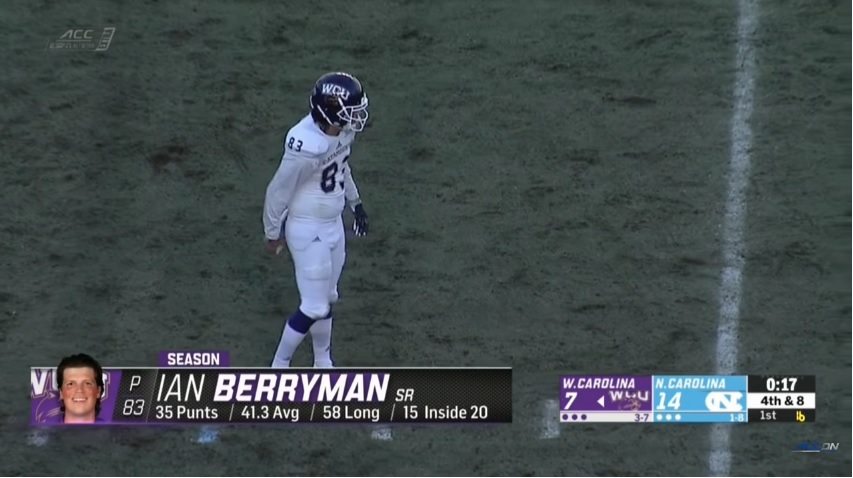 In that corner, Ian Berryman, challenger hailing from Western Carolina.

Punters are people, too. And these two just happen to share a last name. Berryman was one of two specialists signed by the organization following the draft. We profiled kicker Matthew Wright already but Berryman has his own unique path to the NFL. And to hear it from his coaches, he might stick around for longer than anyone expects.

“If he lives up to his potential, there’s no question he’ll be in an NFL camp next year,” WCU head coach Mark Speir told the Citizen Times last August. “(Scouts) are all asking about him now.”

That prediction came true. Even off a down year by his standards, an early season injury didn’t help, Berryman left school as one of its best punters. He set the school record averaging 43.6 yards per punt and more than one-quarter of his boots traveled 50+ yards.

A walk-on at WCU, 2016 and 2017 were banner years for him. Almost 45 yards per punt in the former, a still very respectable 44.4 the latter. He had just 38 attempts as a senior, nearly half of those landing inside the 20, and his average suffered because of it, dropping down to 41.4 yards, easily the worst of his career.

Agents occasionally hit us about a specialist but it’s rare when scouts do. We’ve actually gotten a couple calls from scouts on @WCU_FB punter #83 Ian Berryman. Lots of college punters have NFL legs but few are skilled at directional punting and placement like @Ian_Berryman83. pic.twitter.com/8Umxp8DvBd

Directional punting? Placement? Be still Danny Smith’s beating heart. Sounds like a Steeler to me.

Coming out of college, Berry made headlines for his punt-pass. Berryman’s most memorable college play isn’t quite that zany but he tossed a 5 yard touchdown on a fake field goal against Mercer.

And hey, the dude knows how to hold. That’s a pretty valuable trait you want in your punter. Just watch out for that sneaky right arm he apparently has.

We’ve profiled the struggles Jordan Berry has gone through. His roster spot isn’t a lock, even if he’s fighting the rest of the league, not just Berryman. But Berryman is the dude in camp battling for a spot. Last year, Matt Wile surprised last year to the point where many fans wanted to make him the starting punter. It didn’t happen but Wile latched on in Minnesota, posting a similar season as Berry. We’ve seen upsets before. Heck, that’s how Berry earned the job, beating out Brad Wing for the gig in 2015.