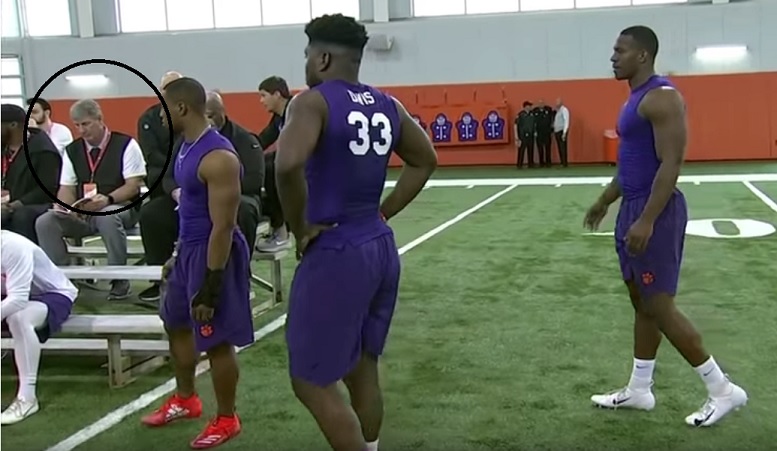 The 2019 NFL Draft will get underway one week from today and that means there’s not much time left to dedicate to the process that leads up to it. For the last week or so, Alex Kozora and I have both been going back over college pro day video and pictures from the last several weeks in an attempt to make sure we haven’t missed spotting key personnel from the Pittsburgh Steelers in attendance at several of them.

Such pro day backtracking has led to Kozora confirming that Steelers general manager Kevin Colbert was indeed not only at the Michigan State pro day this year, but also at the Houston pro day as well. While not as monumental of a find, Wednesday night I was able to discover that Steelers defensive coordinator Keith Butler was in attendance at the Clemson pro day. Butler, in addition to being the Steelers defensive coordinator, is also in charge of coaching the team’s outside linebackers as of this offseason. Keep that nugget in the front of your head as you read on.

While Butler’s now known attendance at the Clemson pro day isn’t as big of a deal as locating Colbert or Steelers head coach Mike Tomlin at one, it can’t be lightly discounted just the same. The fact that Butler was at that Clemson pro day along with Colbert, Tomlin, defensive line coach Karl Dunbar, inside linebacker coach Jerry Olsavsky, and Rick Reiprish, the Steelers senior assistant of college scouting, brings into play even more that the team could have serous interest in defensive linemen Christian Wilkins and Dexter Lawrence or edge rusher Clelin Ferrell.

While Wilkins, who measured in at this year’s scouting combine at 6032, 315-pounds, is a great defensive prospect in this year’s draft class, he not only doesn’t perfectly fit an immediate need for the Steelers this year from a position standpoint, most expect him to be selected within the first 15 picks a week from tonight. Let the record also show that Wilkins is already 23 years of age, which would be on the older side for a Steelers first-round selection during the Colbert era.

As for Lawrence, who measured in at this year’s scouting combine at 6044, 342-pounds, like Wilkins, he would be a tough immediate fit for the Steelers defense. Lawrence is a defensive tackle best-suited to play between the offensive guards at the NFL level. In short, it would be surprising to see the Steelers draft him or Wilkins this year.

With the discounting of serious interest in Wilkins or Lawrence from the Steelers now out of the way, that leaves us with only Ferrell to discuss as possible Pittsburgh first-round selection out of Clemson this year. If you’ve read the site or listened to ‘The Terrible Podcast’ throughout the pre-draft process, you should already know by now that Ferrell, who measured in at the combine at 6043, 264-pounds with 34 1/8-inch arms and 10 1/2-inch hands, has long been in the sights of Kozora and myself as a possible Steelers first-round selection this year for quite a while. Why? Because he checks a ton of boxes when it comes to what Colbert and the Steelers look for.

First and foremost, Ferrell seemingly has a great character. Just read the numerous stories about him over the years from the Clemson beat writers and you’ll understand why the Steelers are likely to be heavily attracted to him. If you’re short on research time, however, just watch Ferrell’s combine media session below. I promise you’ll be impressed by it.

I posted this before, but if you have not watched it, do so now. Clelin Ferrell talks to the media at NFL Combine – #Steelers https://t.co/vZmsfRbVaX

Moving forward from Ferrell’s charterer as a box-checker, he’s also one of this year’s several declared underclassmen and not only that, he’s an experienced one as he not only played in 44 total games at Clemson, he started all 44 of them as well. He’s not even 22 years of age just yet as well as that won’t occur for a few more weeks. Ferrell was voted a permanent team captain last season as a redshirt junior and that’s another thing that will look great on his resume as far as the Steelers are concerned.

Obviously, Ferrell played for a Power 5 College Conference team and a very successful one at that as Clemson won two championships during his time playing for them. In the three seasons that Ferrell played for Clemson, the team registered a 41-3 record. Those three seasons also included Ferrell playing against some top offensive lineman along the way to him registering 166 total tackles, 50 tackles for loss, 27.0 sacks, 51 quarterback pressures, seven pass breakups and five forced fumbles in 2,167 snaps played. Not only did Ferrell win the 2018-2019 Ted Hendricks Award, awarded to the nation’s top defensive end, he was also a Bednarik Award semifinalist.

As you can clearly see by now, there’s not a lot not to like about Ferrell and especially when it comes to him checking the perceived boxes that need checking to be a Steelers first-round selection. The only real knocks on Ferrell are related to his play on the field as he’s not very fluid or experienced at dropping into coverage and he doesn’t bend the edge to the degree that most top ends in a draft class usually do. Those perceived knocks noted, even though Ferrell’s bend and hips aren’t as flexible as other top edge rushers in this year’s draft class, he still figures to be a very productive player at the NFL level and one who can make an impact as early as his rookie season.

In summation, Butler’s presence at the Clemson pro day now has that event as one of three or four this offseason that you can say the Steelers brought the proverbial defensive sink to. Other than Clemson, the Steelers also had a very notable presence at the Michigan, LSU and Alabama pro days. Judging from the Steelers draft history, there’s a good chance the team’s first-round selection in 2019 will come from one of those four schools. If it’s ultimately a Clemson player who is chosen in the first-round this year by the Steelers, odds are good it will be Ferrell.