Some more NFL Draft housekeeping for you. The Pittsburgh Steelers were spotted at Michigan State’s and Temple’s Pro Day today, according to photos and university reports.

The organization seemed to have several members to check out the Spartans. That included area scout Dan Colbert, who generally functions as the central scout, working the Michigan circuit. He’s the one in white, timing this shuttle drill.

I also spotted a couple others in Steelers’ attire, though the backgrounds were too blurry to confidently make out who each person was. Here’s a photo of possibly two of them, including who I swear looks like Kevin Colbert sitting down right behind the vertical jump pole. But again, it’s difficult to tell. 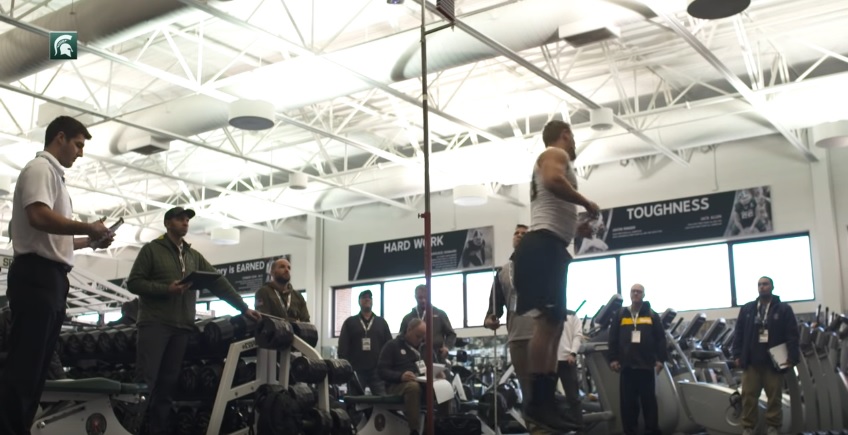 Notable prospects working out today included CB Justin Layne, who is looking more and more like a sure Day Two pick and RB LJ Scott. Scott has received comparisons to Le’Veon Bell for his size and running style. Scott is projected to be picked somewhere on Day Three.

Putting Layne through some of the drills were new defensive assistant Teryl Austin, according to Detroit News.

“Before taking the field, Layne and Willis were tutored by former Lions defensive coordinator Teryl Austin, now a defensive assistant with Pittsburgh.”

A Steelers’ personnel member was also spotted at Temple’s Pro Day too.

Cornerback Rock Ya-Sin is the top name, running a 4.51 and jumping 39.5 inches in the vertical, according to the school’s results. At 221 pounds, Ryquell Armstead ran an impressive 4.45 40 while defensive linemen Michael Dogbe put up 34 reps on the bar. Ya-Sin will be the first Owl off the board and may not reach the Steelers’ pick at #52.

Elsewhere, Mark Gorscak was spotted in Western PA today, as shown in this photo.

In #Pittsburgh today for @13_CJR Pro day. Ran into the @steelers @gors55, who put me to work on the vert immediately. C/O that #SuperBowl ring. #football #KutztownFootball pic.twitter.com/gmn4gSN3dg

The player the tweet mentions is Kutztown running back Craig Reynolds, who recorded nearly 900 yards and 15 touchdowns for a 9-2 Golden Bears’ squad in 2018. According to an interview I dug up from last month, Reynolds is in the area for the PSAC Regional Pro Days. He’ll have a second Pro Day at Villanova on March 25th.

Be sure to follow our always-updating Steelers’ Pro Day tracker. I added Oregon State to the list, the team sending a representative for the workout last week.