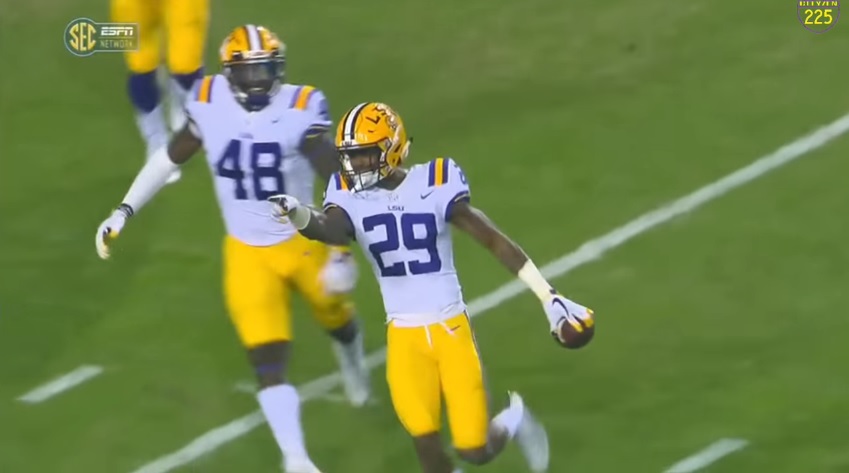 This years group of defensive backs in the 2019 draft class certainly looks deep when it comes to talent and not surprisingly, the Pittsburgh Steelers are certainly showing interest in several of the top-rated ones while at the 2019 scouting combine in Indianapolis.

LSU cornerback Greedy Williams, considered by many to be one of the top three at his position in this year’s draft class, said Sunday during his combine press conference that he had already met with 12 teams while Indianapolis with the Steelers being one of them, according to Aaron Wilson of the Houston Chronicle. Its unclear if the Steelers had or will have a formal meeting with Williams but being he’s an underclassman, a 15 minute interview is likely to take place.

Additionally, Florida safety Chauncey Gardner-Johnson, one of the top draft hopefuls at his position this year, indicated on Sunday that he’s met with all 32 teams in some capacity while in Indianapolis for the combine so that obviously means he’s talked to the Steelers and that’s not overly surprising, either.

Williams, who measured in at the combine at 6017, 185-pounds with 31 1/2-inch arms and 9 1/4-inch hands, registered 71 total tackles to go along with 8 interceptions and 20 pass breakups in the 25 total games that he played in at LSU over the course of the last two seasons. He’s expected to be one of the first three cornerbacks drafted this year and many believe he’ll ultimately be selected somewhere in the first round.

These two top defensive backs are probably just a few of many the Steelers will meet with while in Indianapolis for the combine. They’re expected to interview several who showed in college they could register takeaways based on what Steelers general manager Kevin Colbert said last week.

“Look, we’ve sacked the quarterback at a very good rate, but our takeaways are not very good at all,” Colbert said Wednesday, according to Bob Labriola of steelers.com. “It’s really reflective on the players we have back there. What we want to look at, what we want to value looking forward is, let’s value the takeaway-capable guys who have shown they’ve been able to do that in college.

“Our game has always been about getting physical players who can come off the edge and close off the edge and make a tackle. But are they doing that at the expense of not making plays on the football? We have to maybe try to find that balance and maybe be more open to the concept that the game is constantly changing and if you want playmakers in the back end, then find someone who has done it.”

Williams, Gardner-Johnson and the rest of the defensive backs in attendance for this year’s scouting combine will do their on-the-field work on Monday at Lucas Oil Stadium in Indianapolis.