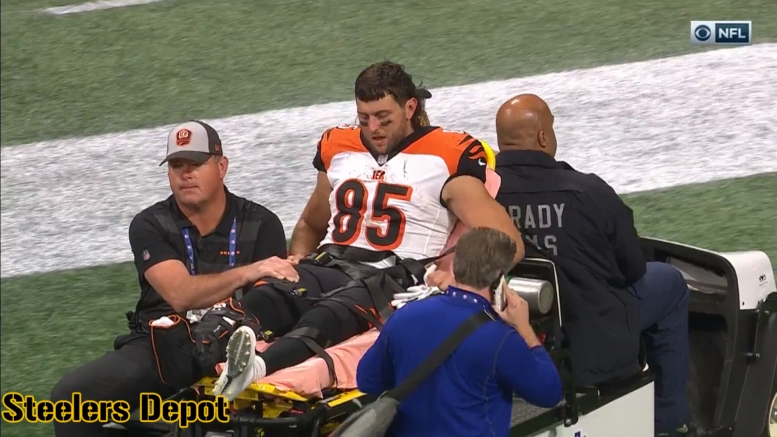 Since Tyler Eifert became the Cincinnati Bengals’ first-round pick in 2013, he has been known for two things: catching touchdowns, and getting injured. It’s because of these two things that he has become such an enigma. When healthy, he has played at a Pro Bowl level, but he has literally sat out more games due to injuries than he has played in since 2013.

After Eifert completed his rookie contract in 2017, the Bengals signed him to a one-year incentive-laden contract as he worked to return from yet another back injury, on which he has had operations multiple times. While the deal was worth up to $8.5 million based on performance, only $3 million was guaranteed.

He caught 15 passes for 179 yard and a touchdown over four games last season before he suffered a gruesome ankle injury that ended his season in dramatic fashion, and in tears.

As a sidenote, because of the lengthy amount of time that he has spent on the sideline, you could say that Eifert actually aided the tight end market. His two backups, C.J. Uzomah and Tyler Kroft, both had opportunities to start which he was injured. Both signed three-year deals this spring worth at least $6 million per season, Uzomah re-signing with Cincinnati.

But he is looking to reclaim his top spot not just on the Bengals but in the hierarchy of the NFL among all tight ends. He looked as though he would live up to the billing when in 2015—despite playing in only 13 games, of course—he caught 52 passes for 615 yards and 13 touchdowns.

In 43 career games over six seasons, Eifert has caught 142 passes for 1716 yards and 21 touchdowns. Those are strong numbers for that length of time, especially if you consider the number of games in which he was limited or his time was cut short due to injury.

“You get injuries of all different types and how you can predict Tyler Eifert going down with the injury he had, I don’t know that there’s any sports scientist that could’ve predicted that”, said Duke Tobin, the team’s director of player personnel.

“They might have said, ‘maybe his back will hurt’, or ‘maybe his ankle will hurt’, and he’d miss time, but to know that his ankle is going to get snapped by a backside block, it’s hard”, he went on. “There’s so much with injuries, and there can be injuries that are caused in practice maybe by overuse. The more we can understand what a guy is capable of throughout the course of the week and be able to pull him back a little bit before we get that injury, I think that’s what we’re really working on”.