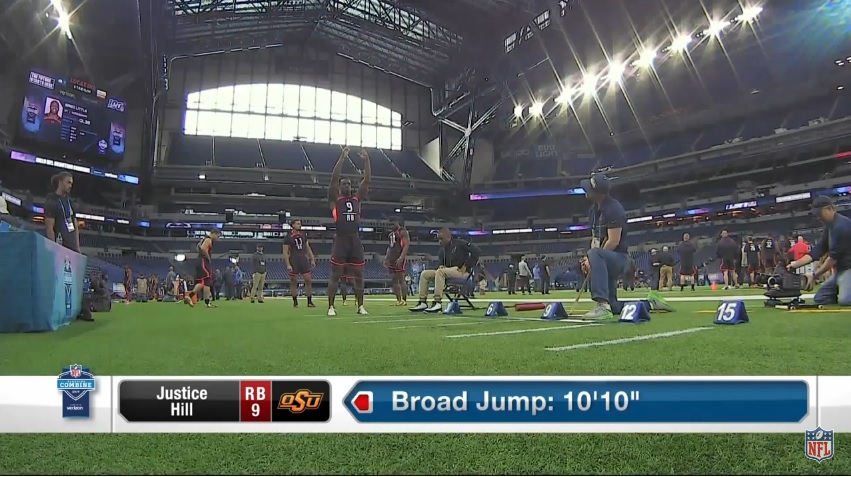 Day One of the 2019 NFL Combine is in the books. Before we jump into tomorrow’s big day, with the quarterbacks, receivers, and tight ends working out in one Saturday marathon event, let’s recap everything that happened at Indianapolis on Friday.

If you missed it, we’re keeping track of who we know the Steelers have interviewed over here. And as always, bookmark our combine results tracker by clicking this link. We’ll update it live throughout each day of workouts.

Let’s dive into the linemen and running backs.

– Biggest winner of the day? NC State center Garrett Bradury. Mentioned him yesterday as a back-end first round pick. I think he’s squarely in that camp now and may go as high as the teens. Someone made a good comparison to Frank Ragnow’s “rise,” who ultimately went 20th to Detroit in the 2018 draft. Ran the third fastest 40 time (4.92) with a very good 1.74 ten split while looking fluid pulling in drills. Shaun O’Hara and Joe Thomas very complimentary of him during the NFL Network’s coverage.

– Andre Dillard tested about as well as you could hope for. 1.7 tens split is excellent and he killed it with a 9’10” broad and 4.4 short shuttle. Those numbers put him in some elite company with historically good results.

He has the size and length that he covers a ton of ground on his kickslide. A good workout overall and very likely first rounder.

– I didn’t love Charlotte’s Nate Davis in the little I saw at the Senior Bowl but it today was a good one for him. Great bend, gets really low in his stance, and showed coordination and balance in his drills. That “flip hips” drill where the coach takes the linemen in a straight line? A lot of guys bob and weave all over the place. Not Davis. He stayed straight down the hashes while being able to change directions.

– Everything looked easy for Boston College’s Chris Lindstrom. Ran really well despite tipping the scales at nearly 310 pounds (4.9 40, 1.7 split) with a 30.5 vert, 9’9″ broad, and 4.54 shuttle. Explosive player who showed power and ability to uncoil his hips on contact in those “fold block” drills. Big, strong lower half whose base doesn’t narrow.

– They mentioned it on the broadcast but tip of the hat to Florida tackle Jawaan Taylor. Hamstring pull kept him from running the 40 and everything but the bench, where he put up 24 reps with 35 1/8 inch arms, but he gutted it out through the drills and still looked good. As Joe Thomas said (he was an excellent addition, by the way), linemen have to play through the pain. Gotta be the toughest guys on the team. And Taylor showed he wasn’t going to shy away from the opportunity, even if he wasn’t quite at his best. Respect.

– Weber State’s Sua Opeta wasn’t a guy I knew anything about coming into this thing but liked the way he moved in drills. Fluid guy who was comfortable pulling. 1.66 ten split is ridiculous, best of the day by the big guys up front. 33 inch vert to boot.

– Morgan State’s Joshua Miles was a weird one too. Insane 36 inch vert. According to NFL Combine Results, of interior linemen, only Ben Miller’s 37.5 mark – and he was a 263 pound center – and Eric Steinbach’s 36 jump matched or beat Miles’. His other testing wasn’t nearly as strong and he screwed up the “flip hip” drill, trying to kickslide at the begin before the coach brought him back and explained it to him again. He was about the 15th guy in his group to go through the drill too so there’s no excuse. Stuff coaches don’t like to see.

– Tyler Jones from NC State did the same thing. The “rusher” in the kickslide drill, you’re supposed to run full sprint to stress the tackle in the drill and make him quickly cover ground. Jones jogged his way through so slowly they made him redo it. He didn’t run the 40 and his other testing was largely average, at best.

– You can definitely tell some of the big uglies were gassed by the end of the day, a long, mentally draining process. Dillard was one of them. So was Purdue’s Phil Haynes, a big man at 322 pounds.

– Except for Dalton Risner. Dude’s energy knows no limits. Saw the clips of him at the Senior Bowl. High energy, high intensity. Check him out as the “rabbit” in the mirror drill. Highlight of the day.

Dalton Risner as the rabbit has been my favorite part of the Combine. #NFLCombine pic.twitter.com/na52AowG55

– Greg Little had a rough day of it and there’s a clear separation between national media, who believes he’s a potential first rounder, and draftniks, who think he’s far from it. Today seems to lean towards the latter group: 1.84 split and a 25 inch vertical. Looked stiff and slow in drills.

In his defense, Orlando Brown Jr. had one of the worst Combine’s ever last year and turned out to be a very good player for the Ravens, though his draft stock took a hit, falling to the third round.

– Definitely not the fastest group of runners Indy has ever seen. Tons of guys who ran slower than expected.

None moreso than Georgia’s Elijah Holyfield, who ran 4.79, 4.81 and officially, a 4.78. A favorite on the Internet, he was expected to run somewhere in the 4.5’s. That drastic of a difference and poor of a time is something that can seriously hurt your draft stock, especially for a guy like him who doesn’t have a lot of tape (215 career carries). 29.5 inch vert and 9’10” broad didn’t do him any favors either.

– Myles Gaskins and Miles Sanders two solid days. Gaskins shows burst out of his cuts while Sanders is fluid and solid in pretty much everything that he does. Sanders killed his workout with a sub 4.5 40 time, 36 inch vert, 10’4″ broad, and 6.89 three cones.

– If you watched Justice Hill at Oklahoma State, his numbers don’t come as a major shock though make no mistake, they’re very impressive. 4.4 40, 40 inch vert, a rare club to be apart of. Even pulled off 21 reps on the bench. Strong day for him.

– What worried me about Tony Pollard on tape popped up in his drills. Stiff, straight-line player who struggles to lower his pad level and change directions. 4.52 40 is slower than I expected too. Did catch the ball a little cleaner than I saw on tape.

– If the Steelers want to stick with their trend of drafting big running backs, Temple’s Ryquell Armstead might be a name to circle. Ran a 4.45 40 at 5’11, 220 pounds, though his vert and broad were underwhelming. But a name I want to go back and watch nonetheless. 34 career touchdowns.