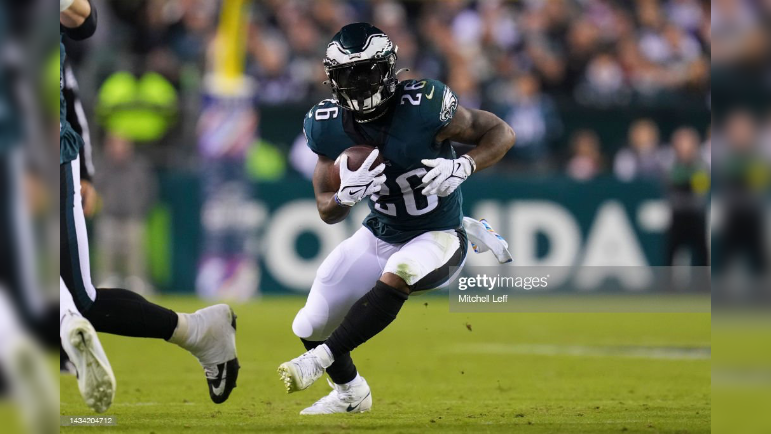 In the midst of the impressive start to the season that the undefeated Philadelphia Eagles have put together on both sides of the football, much of the attention offensively has centered around the star turn of third-year quarterback Jalen Hurts, who is currently in the middle of a potential MVP season under second-year head coach Nick Sirianni.

With Hurts’ dual threat abilities as a runner and a passer, the Eagles’ offense has taken off, especially after the acquisition of standout receiver A.J. Brown via a trade with the Tennessee Titans on draft day.

Seeming lost in the discussion of the great Eagles’ season to date though has been fourth-year running back Miles Sanders, who has rushed for 485 yards and four touchdowns on the year on just 105 carries. In the Eagles’ RPO-heavy scheme, Sanders has carved up opposing defenses seemingly every week, pairing with Hurts to provide the Eagles with a superb 1-2 punch.

A lot of the focus from the Steelers will be on stopping Hurts on the ground and forcing him to sit in the pocket and throw, but for Steelers defensive captain and star defensive tackle Cameron Heyward, a lot of attention needs to be paid to Sanders, a Pittsburgh native, on Sunday.

Speaking with reporters Thursday from inside the locker room at the UPMC Rooney Sports Complex, according to video via Steelers.com, Heyward was quick to point out that with all the weapons the Eagles have offensively, the Steelers better take Sanders seriously in the RPO game or he’s going to dice up the defense once again.

“He does a great job of going north to south, but he can also bounce it,” Heyward stated to reporters, according to video via Steelers.com. “That RPO, either Jalen’s taking it and passing it or running. But if you don’t take Miles Sanders seriously, he’s gonna really dice you up.”

So far this season that’s exactly what Sanders has done, averaging an impressive 4.6 yards per carry for the Eagles, recording games of 70 or more rushing yards in four of the six Philadelphia wins on the season, including an impressive 27-carry, 134-yard, two-touchdown performance in Week 4 against the Jacksonville Jaguars.

The #Eagles RPO game is STRONG

Some of many takeaways for me after watching the tape of the #Eagles win over the #Cowboys – catch them all in my All-22 Review! #FlyEaglesFly

Though Sanders hasn’t provided much as a receiver out of the backfield, he’s quietly become one of the better between the tackles runners in the league, using his great vision and initial first step quickness to get to the second level in a hurry, running well behind his pads.

It helps that the Eagles have a great offensive line and a really good scheme to create rushing lanes, but Sanders is taking advantage of every opportunity and is putting up impressive numbers in a contract year.

The Steelers have done a nice job of bottling up the run game — for the most part — this season, but Sunday’s matchup against the Eagles will be the toughest test of the season due to the mobility of Hurts and the dynamicism of Sanders and second-year pro Kenneth Gainwell in the backfield.

It’s become a pick your poison with the Eagles’ offense this season.