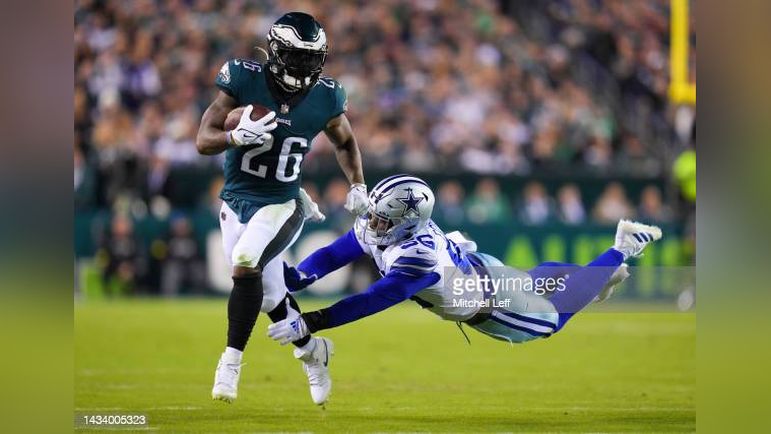 The Philadelphia Eagles are the NFL’s lone undefeated team, and one reason for that is their explosive offense. The Eagles are averaging 26.8 points per game this season which is good for fourth-best in the league. One reason for Philadelphia’s dominant offense is their rushing attack, which is spearheaded by Pittsburgh native Miles Sanders.

“He’s a good back,” he said in a transcript via the team. “A really good back. He really has gotten a ton better since we played them a few years ago” Austin said. “I think overall, as a back, he runs behind his pads, he finds the hole, he gets downhill, he’s really becoming a really, really, really good NFL back.”

This season, Miles Sanders has 485 rushing yards for 4.6 yards per carry, and has crossed the pylon on four of those carries. The Steelers are aware of the speed Sanders poses as well, as when these teams met back in 2020 Sanders scampered 74-yards through the Pittsburgh defense for a touchdown.

To beat the Eagles, the Steelers’ defense will have to stop the run and make Philadelphia one-dimensional. This season, the Steelers have been average at stopping the run, allowing 118.9 yards per game and 4.1 yards per carry.

The Steelers are continuing to get healthy on the defensive side of the ball, even though they are still missing T.J. Watt. Like the last two weeks, it will be important for the Steelers’ defensive front, and in particular Cam Heyward and Larry Ogunjobi, to clog up the holes the Eagles’ offensive line will try to create for Sanders.

As Austin said, Sanders loves to follow his blocks down the field and does not do a lot of dancing behind the line of scrimmage. He just goes. It is vital for the Steelers’ defensive line to make sure holes don’t open and that their linebackers like Myles Jack and Devin Bush can run downhill and wrap Sanders up before he gets upfield.

If the Steelers’ front seven can handle the Eagles’ rushing attack, then their secondary, which is continuing to get healthy, will have a chance to make some game changing plays. If they do get those chances, the Steelers’ defensive backs will need to capitalize on them.