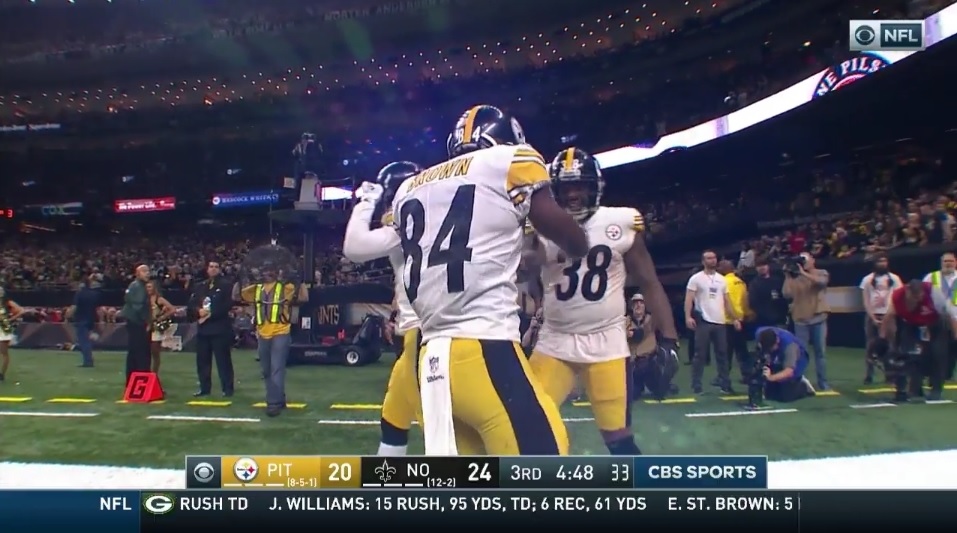 Your stats of the weird from today’s crushing loss to the New Orleans Saints.

– Antonio Brown and JuJu Smith-Schuster became the first duo in franchise history to each catch 100 passes in a season. They’re the first pair to achieve that since Emmanuel Sanders and Demaryius Thomas did in 2014.

Brown’s 15 touchdowns break his franchise/career record. He’s the first receiver to have 15 in a season since Dez Bryant caught 16 in 2014.

– Jaylen Samuels has three receiving touchdowns this season. He’s the first Steelers’ rookie back with three of those in a season since Rodney Carter in 1987. Those are the only Steelers to do so ever.

– Ben Roethlisberger’s 630 attempts this year is a career high. And there’s still one game to go.

It’s the second time this season Roethlisberger has lost a game throwing for at least 350 yards, three touchdowns, and zero picks. Today and Week Two against Kansas City. All other QBs are 9-6 this year.

Fitzgerald Toussaint fumble: Ball at the Broncos 34, 10:00 left in the 4th, Steelers leading.

– After shutting out the Patriots last week, the Saints went 4-4 in the red zone tonight.

– Although there were some brutal calls against the Steelers, the Saints were actually called for more penalties (nine) and yards (91). Steelers were 6/79.

– Steelers second half of the season record since 2013.