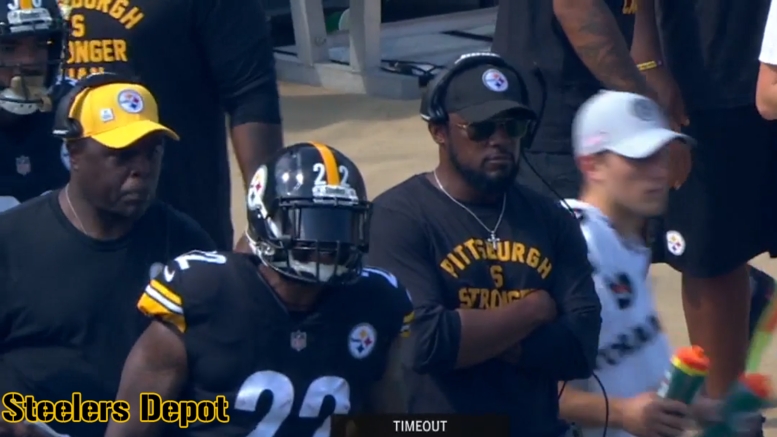 Many many people in and around Pittsburgh breathed a heavy sigh of relief when 4PM on Tuesday finally passed, signaling the official end of the main part of the Le’Veon Bell saga, in that it confirmed that the running back would not be playing for the Pittsburgh Steelers in 2018, ending weekly speculation over whether or not he would report.

But veteran running back Stevan Ridley may have been the most relieved of all, as one of the most likely candidates to be released if Bell did end up coming back to the team. As a veteran reserve, his role in the lineup would obviously be replaced by a first-team All-Pro.

“It was hard if I thought about it”, Ridley admitted to Chris Adamski about the week-to-week uncertainty about his employment relative to whether or not a certain running back would decide to make an appearance that week. Now he knows, however, that his roster spot is likely secure for the remainder of the season.

While a part of him is obviously glad that Bell never reported, he also knows a bit about what into his decision. Ridley was once a pretty accomplished running back himself, rushing for 1263 yards and 12 touchdowns in his second season back in 2012.

His role scaled back a bit a year later, and then he suffered a serious knee injury in his contract year of 2014, tearing both his ACL and MCL. The New England Patriots would not re-sign him and he has since spent the rest of his career as a journeyman.

“I got hurt in my contract year, and I know what I missed”, Ridley said. “So I look at things differently, but I am also a team guy. I just respected the decision that 2-6 makes that he’s cool with. I don’t want nothing bad. I don’t want anything against him”.

Bell opted to pass up a $14.55 million guaranteed salary in 2018 on the franchise tag in favor of ensuring, at least as best he can, that he will be fully healthy when he hits unrestricted free agency for the first time in his career in March 2019. He likely expects to land a contract paying him somewhere between $15-18 million annually with $30-40 million in full guarantees.

But that was his decision, and now Ridley and the rest of the group can move on. For what it’s worth, the veteran running back sees a lot of similarities between this Steelers group and the Patriots team he played on that went to four straight AFC Championship games, winning one Super Bowl in the process.

“The guys that we have in the room are ready”, he said “Our running backs room is solid. Could it have been better? Sure. But that’s not how the Lord planned it. That’s not how it’s going to work out. And we can’t sulk on it. We’re just rolling with what we’ve got and keep pushing”.