The Pittsburgh Steelers 2019 season will likely include running back James Conner being the bell cow in the backfield once again. However, judging by numerous things said by various Steelers players and coaches during the team’s recently concluded offseason practices, Conner might not have as heavy of a workload as he did last season before going down with an ankle injury. When that injury occurred, however, then-rookie running back Jaylen Samuels filled in admirably for Conner and for the season, the Steelers trio of running backs that were used in all of 2018 did a great job of closely replicating the stats that running back Le’Veon Bell posted during the 2017 season.

As our very own Daniel Valente pointed out in his Monday post, last season we saw Conner, Samuels and Stevan Ridley combine to rush for 1,309 yards and 13 touchdowns on 300 total carries and that averaged out to 4.4 yards per carry. Bell, on the other hand, rushed for 1,291 yards and 9 touchdowns on 321 total carries during the 2017 season for an average of 4.0 yards per carry. As for receiving stats, the trio of Conner, Samuels and Ridley all combined in 2018 to again slightly best Bell’s 2017 stats, as you can see in the table below. 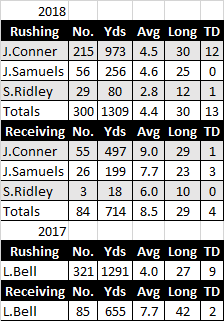 Keep in mind, however, that the above data is just raw stats and so to get a better picture when it comes to the Steelers running back production in the last two seasons, we need to look at successful play rates and to do that we will use the formula that Football Outsiders has used for quite a while for each down. 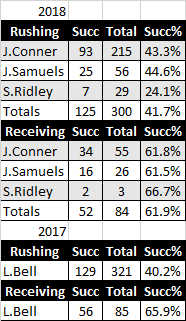 While the combined run success rate posted by Conner, Samuels and Ridley was better than that of Bell’s from 2017, that 41.7% number needs to be much closer to 50% in 2019. Ridley is no longer in the picture and he’ll seemingly be replaced by rookie running Benny Snell Jr. during the 2019 season.

Overall, the Steelers running game wasn’t very good last season and especially from a successful play standpoint. Sure, Conner did a great job of producing explosive plays on the ground last season as he had 9 such runs good for 20 yards or more. That needs to continue in 2019 and he must have a higher rate of success on his other runs.

As we saw last season, merely replacing Bell’s numbers wasn’t enough for the Steelers and especially when it comes to successful play rates. The Steelers don’t necessarily need to run more in 2019, they just need to run better on a down-by-down basis.