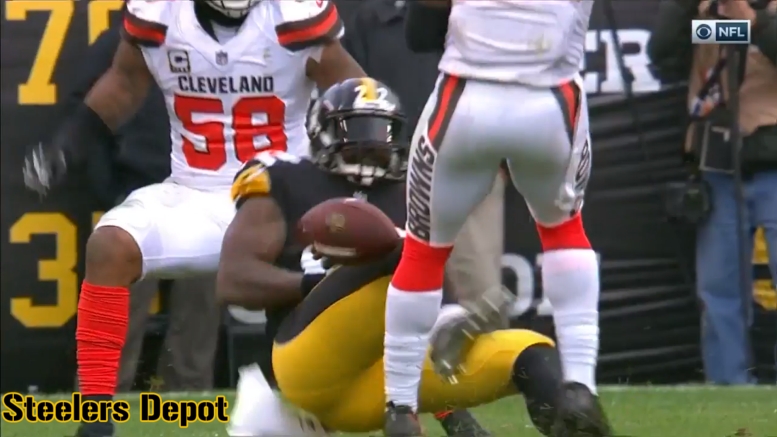 Stevan Ridley brought a little bit of excitement with him as a potential backup running back with a brief flash of success in 2017 when he was signed late that year due to an injury suffered by James Conner. It was enough of a preview to get himself re-signed even though he had been on the street in 2017 by that point.

By all accounts, he seemed to have a perfectly good offseason, growing into the offense and working well with teammates, showing burst in practice and improving his craft in the passing game, both as a receiver and a blocker. He even decleated somebody on one block in the preseason, exciting left tackle Chukwuma Okorafor because it meant he didn’t have to block for that snap.

But things just did not go well for him in the regular season, more often than not, which was largely defined by two fumbles. The first came in a blowout victory against Cleveland in the first game after the bye week, and the only game in which he would see work in the next five weeks was the Panthers game on a short week when they were giving Conner time off.

Jaylen Samuels, the rookie fifth-round pick, replaced him as the top back, and I’m sure Mike Tomlin is regretting letting Ridley take a third-and-two carry against the New Orleans Saints in Week 16, on which he fumbled, kickstarting the Saints’ game-winning drive. He didn’t see the field again after that, and may never do so again.

I think it is very unlikely that the Steelers attempt to re-sign Ridley, whose career may well be over at this point—though perhaps he could be assigned to the Birmingham Iron, the Steelers’ affiliate team of the Alliance of American Football.

Pittsburgh originally signed him off the street in 2017 and he was able to put in a good game in a meaningless season finale against a 0-16 Cleveland Browns team. He also flashed in the preseason in 2018, but he came up small in key moments when given the opportunity in the regular season.

And he put the ball on the ground multiple times. It was the deathblow. If you don’t do much in the passing game and you lack ball security, then you have no career as a backup running back.

Ridley fumbled nine times in his four seasons with the New England Patriots over roughly 350 or so touches. He fumbled twice on 58 touches with the Steelers over the past two years. They have Conner and Ridley and will add somebody else. They would bring Terrell Watson back before him at this point, I think. Not to be overly harsh about it, but I think that is the reality.