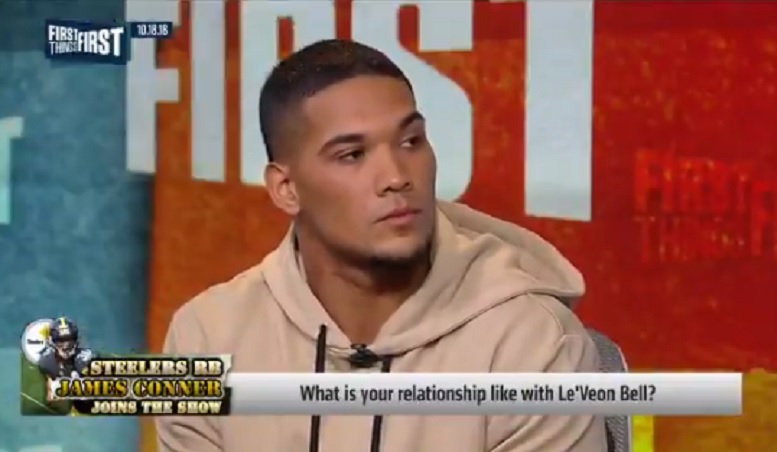 Even though Pittsburgh Steelers running back Le’Veon Bell has decided to sit out the first six weeks of the 2018 regular season, it’s obvious judging by his tweets on Twitter that he’s been very impressed with how well fellow running back James Conner has done at filling in for him while he’s been away. As it turns out, Bell hasn’t just shown support for Conner via his social media accounts, he’s also sent some personalized texts to the second-year running back out of Pittsburgh since the season started.

“Man, anytime I do something good on the field, I always come back to the locker room to a text from him saying ‘good game’ or a ‘nice move right there,'” Conner said Thursday morning during an interview on ‘First Things First’ when asked to explain his current relationship with Bell. “So, Le’Veon’s super cool, he’s a great person and with him holding out, people are calling him selfish and all that, but not the case at all. It’s his business and that’s my guy.”

While Bell might be Conner’s guy, Conner appears to be offensive coordinators Randy Fichtner‘s guy and that was evident when he spoke to the media this past week.

“He’s been broken out of the formation and he’s done it well when he has been,” Fichtner said of Conner’s versatility as a running back through the team’s first six regular season games. “So, I don’t know that there’s any real limitations on James’ game right now. He’s been open to every position that we put him in (and) concepts, whether it’s routes (or) concept runs, protections, he has done a really nice job.”

Conner is currently fifth in the NFL in rushing yards with 453 and his 710 combined yards has him tied for eighth in the NFL as he enters the bye week.

While there’s still an outside chance that Bell will show up next week to sign his franchise tag, even if he does, it’s unlikely he’ll be ready to play for a few more weeks after that. Conner was asked Thursday morning if Bell has told him what his current report plans are.

“No clue, I have no clue,” Conner responded.

In case you missed it, you can watch Conner’s full interview from this morning below.