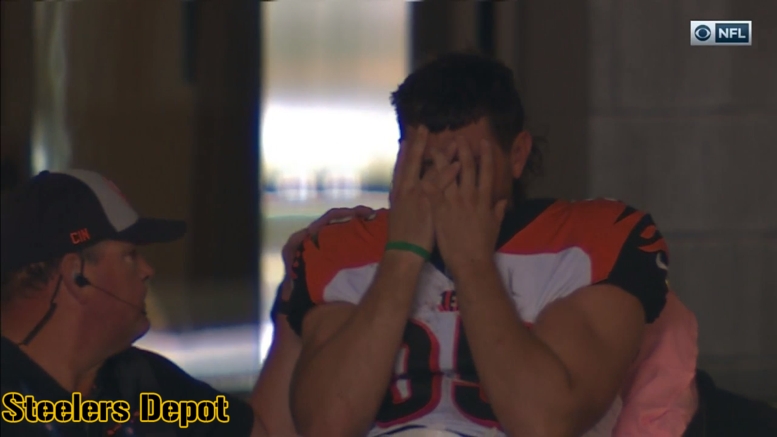 Some people just don’t have a whole lot of luck—or at least, the luck that they do have is frequently bad. That must be how Cincinnati Bengals tight end Tyler Eifert is feeling right about now. The sixth-year veteran suffered a nasty looking season-ending ankle injury yesterday in the team’s narrow victory to go to 3-1 on the season.

The injury occurred early in the second half and resulted in him leaving the field on the back of a cart, complete with an air cast around his ankle. He was set for surgery later in the night. “This was the hardest I’ve worked to put myself in a position to help this team succeed and having this happen crushes mev,”, the tight end wrote on Twitter later in the day.

“If I’ve learned anything from before, it’s not a time for self-pity and negativity. The only thing to do is move forward with optimism. With the support of my family, friends, trainers, teammates, and coaches, this will soon be another obstacle that was overcome and life will go on. Thanks to everyone who has sent prayers and well wishes my way!”.

Needless to say, it is yet another season-ending injury for the former first-round pick. He already came into this season having misses as many games due to injury as games played. The injury ensures that the scale will tip steadily in the negative direction. He will have played in just 44 of a possible 96 games through his first six seasons.

And one wonders what is next for him. The Bengals were only willing to sign him to a one-year incentive-laden contract this offseason because they know that he has not been able to stay on the field.

He might have a hard time finding another suitor next season who is willing to pay much more than veteran-minimum to take on the risk of allocating a lot of resources to him and game-planning with him in mind.

The Bengals have a lot of experience working without him, however, and C.J. Uzomah and Tyler Kroft, a pair of fourth-year veterans, have become an integral part of their offense during that time because of the opportunities they have gained thanks to the sidelined Eifert.

“You hate to see it for him, especially with a guy that’s gone through so much to have something freak happen like that is tough”, his quarterback, Andy Dalton, said of the injury and of his history after the game was over. “You have to keep playing”.

And play on they must. They are off to a 3-1 start to the season after coming off of back-to-back losing years. There is every incentive to carry on, not that there could be any doubt of them doing so.