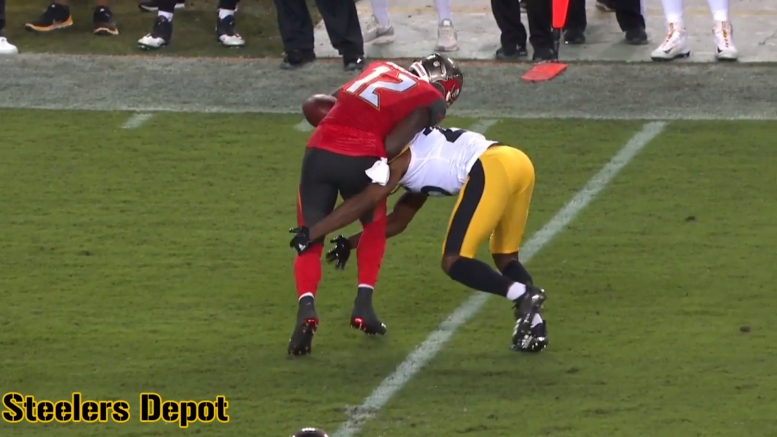 With Coty Sensabaugh missing due to a left toe injury, Artie Burns worked as the Pittsburgh Steelers’ first team right cornerback, according to what Burns told the Trib’s Chris Adamski after practice.

From Adamski and the Trib.

Burns, however, wouldn’t go into details about his tardiness to Saturday’s walkthrough that ultimately led to his benching against the Cleveland Browns. Mike Tomlin confirmed that report during Tuesday’s press conference.

It’s unclear if Burns received all the reps or if he split time with Cameron Sutton. Sutton replaced Sensabaugh following the injury late in the second half Sunday. Sensabaugh played well enough but allowed an ugly touchdown to Antonio Callaway despite pinning the receiver’s arm and getting flagged for pass interference.

He was asked how difficult it was to stand on the sidelines.

Against the Browns, he played ten snaps, all coming on special teams. It does appear, however, that if Sensabaugh sits this weekend – and maybe even if he doesn’t – Burns will get the starting nod.

His career is clearly at a crossroads, for multiple reasons, and the remainder of this season will be pivotal to determining his future and role as a Steeler.

Based on our charting, quarterbacks have gone 13/18 for 233 yards and four touchdowns when targeting Burns this year. His season seemed to turn in the right direction against the Baltimore Ravens and Atlanta Falcons but struggled against the Cincinnati Bengals, leading to another benching on the defense’s final drive.

He reportedly had a strong week of practice before being late to Saturday’s walkthrough. He’ll need another good one of those this week and carry that over into the game to get his confidence back and finish the season on a better note than how it’s begun.