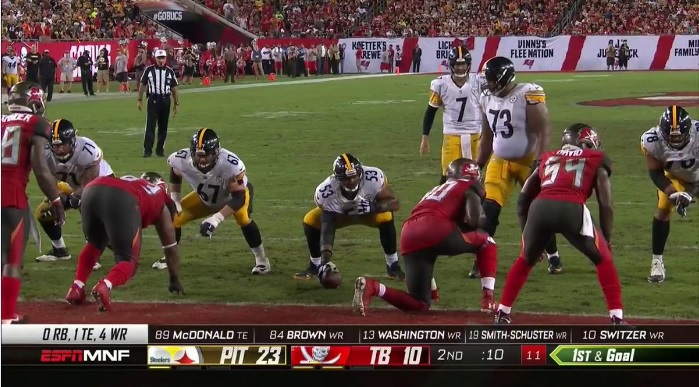 It was…a close one. But I’ll take a win. Winners and losers from the Pittsburgh Steelers 30-27 win over the Tampa Bay Buccaneers on Monday night.

Ben Roethlisberger: Again, without much of a run game, everything was on Roethlisberger’s shoulders. His two minute drill at the end of the first half might have been the best of his career. The deep ball is still a real issue, he missed what should’ve been an easy touchdown to Antonio Brown, but with how much is on his plate, Big Ben has still been excellent.

JuJu Smith-Schuster: Nearly as favorite a target as AB, Smith-Schuster is doing work out of the slot this season. Tough plays over the middle and he’s been the Steelers’ best deep threat this season, despite not having innate, blazing speed. JuJu has been consistently excellent all three games, something few players on this team can claim this season.

Vance McDonald: Tonight proves why you deal with all the injuries. McDonald exploded tonight, highlighted by his insane 75 yard touchdown, permanently owning a piece of Chris Conte’s soul. I have a newfound respect for Jesse James but he can’t make those types of plays.

Defensive Splash Plays: Three interceptions in the first half. Who saw that coming? Sure, they weren’t the most difficult plays but creating turnovers is what this defense needs. Artie Burns forced a fumble too.

Jon Bostic: Bostic played a strong game, minus one dumb penalty on a Fitzpatrick slide. His tipped ball created the Mike Hilton interception in the first half. He’s playing as we expected, and nothing really more than that, but it’s been effective.

Ryan Switzer: For two reasons. One, his TD pass, even if it was about the ugliest catch you’ll ever see. But even bigger than that, his over-the-shoulder punt return on the final drive was a beauty. To track it, catch it clean, and gain yards when in a lot of cases, that ball is bouncing away, muffed, you get the idea. Like I wrote coming out of Week One, he’s a natural at it, and plays like that show why.

Joe Haden: Late add here. Almost forgot – shame on me. Glad to see him return. Best defender in the secondary tonight. The one guy who can compete at the catch point.

Coty Sensabaugh/Artie Burns: Turns out that like quarterbacks, if you have two starting right corners, you don’t have one. Sensabaugh started, rotated with Burns every other series. It didn’t matter though. Both were equally bad in their own way. Sensabaugh for not playing the catch point, Burns for not even being in the vicinity to do so. They were both torched, predictably so, This team has no solutions.

Chris Boswell: Yup, time to be officially worried about The Boz. Missed extra point and 47 yard field goal tonight. I don’t have an answer. I don’t think anyone does. Just have to hope he can kick through it.

Alejandro Villanueva/Matt Feiler: Neither tackle was great tonight. Villanueva flagged twice and had trouble with Jason Pierre-Paul’s bull rush, consistently walking him back. I already know I’m going to charge Feiler with one sack when the All-22 goes up.

Penalties: Three’s a dozen. 36 in three games, a tidy 12 in each. Gotta change. And fast. The NFL’s “roughing the passer” rules suck but they’re not the lone scapegoat here.