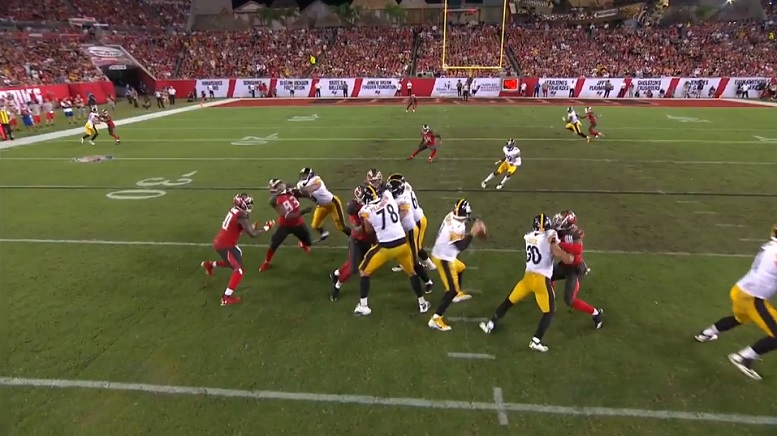 Following the Pittsburgh Steelers week 2 home loss to the Kansas City Chiefs, I dedicated a post to how poorly the offense managed the clock during their final scoring drive of that game. Monday night in their win over the Tampa Bay Buccaneers, the Steelers offense showed us right before halftime how effective and masterful they can be at running a two minute offense with all three timeouts at their disposal and a lot less than two minutes remaining on the clock. In order to show just how beautiful that 9-play scoring drive was by the Steelers offense, I decided to break down each and every play of it for you.

The Steelers first play of the drive wasn’t anything fancy. It was just a simple short switch route combination by two players lined up in the slot against a zone defense. Quarterback Ben Roethlisberger easily connected with wide receiver Antonio Brown on a short curl route for 6 yards and the drive is underway with the clock ticking.

After Brown is tackled after his first down catch the Steelers offense uses 20 seconds of ticking clock before getting their next play run. That’s an acceptable amount of time being as the football is still on the Steelers side of the field, it’s second down, and the Buccaneers still have all three of their timeouts. Run the play too quickly in this situation and fail to convert, then the Buccaneers might call a timeout to set up a crucial third down in hopes that they can get the football back with plenty of time left to get at least a field goal before halftime.

The Steelers second offensive play was just a simple check down to running back James Conner in the middle of the field and once again against a zone coverage in the second level. Not only does Conner easily pick up the 4 yards needed for a first down, he picked up an additional 14 yards thanks some to a nice block by tight end Vance McDonald.

With the football now right near midfield, the Steelers properly decide to use their first timeout with 43-seconds remaining.

Following the timeout, the Buccaneers decide to get out of their zone defense. They tip their cover-1 man scheme off when wide receiver JuJu Smith-Schuster performs a short return motion. At this point, Roethlisberger knows he has Brown one-on-one against Buccaneers cornerback Brent Grimes, who is playing way off in order to help prevent him getting beat over the top. Brown, probably via a check from Roethlisberger, runs a simple out route underneath Grimes and the quarterback hits him right along the sideline for a gain of 9 yards. Brown going out of bounds also stopped the clock with 40 seconds left in the half.

After the Steelers lined up to run their next play, the Buccaneers decided to burn their first timeout to talk things over.

On 2nd and 1 from the Buccaneers 42-yard-line, the Tamp Bay defense again stays with their man coverage with one high safety only this time Grimes is pressing Brown at the line of scrimmage instead of giving him a cushion. Roethlisberger points out the coverage and at the snap of the football you’ll see McDonald and Washington on the left side of the formation both run vertical routes to clear out the underneath for Smith-Schuster to run a quick return route against Buccaneers slot cornerback M.J. Stewart. This is a route that Smith-Schuster has to win. He does and Roethlisberger hits the young wide receiver in stride. Smith-Schuster then uses a nice stiff-arm and his speed to beat Stewart to the sideline for a gain of 12 in addition to getting a clock stoppage.

On this first down play, the Steelers go back to a formation they started the drive with and that includes two wide receivers in the right slot only this time against man coverage with a single high safety. Additionally, the Buccaneers choose to blitz on this play and send 6 after Roethlisberger. The Steelers “levels” route combination run by Washington and Smith-Schuster gives Roethlisberger a few options to the middle of the field against man-coverage and the quarterback chooses the tougher of the two throws, the deeper in-breaking route to Washington. To Roethlisberger’s credit, however, he throws the ball high and away from Washington’s trailing defender and the rookie wide receiver makes the catch for a gain of 13 yards. Conner’s blitz pickup on this play also needs to be recognized as it gave Roethlisberger the extra time needed to choose Washington down the field over Smith-Schuster underneath.

After Washington is tackled the Steelers wisely use their second timeout with 28 seconds remaining in the half. The offense is now set up perfectly to finish off the drive with a touchdown as the whole playbook remains open at this point with one timeout still remaining.

Against man coverage again on first down, Roethlisberger easily connects with Conner on flare out right to the left side. That easy connection is made possible thanks to Brown somewhat rubbing the inside linebacker responsible for covering Conner out the backfield. Had the rub by Brown been tighter and perhaps a little more deliberate, maybe Conner is able to turn up the field for a little more yardage. Regardless, Conner still was able to get 3 yards before going out of bounds and stopping the clock.

On second and 7, the Steelers effectively run a nice pick-play out a bunch formation on the right side via tight splits to the field side.This route combination sets enough of a pick/rub on Stewart that Smith-Schuster gets an easy free release with plenty of open field to his side. To Stewart’s credit, he’s able to cut off Smith-Schuster before he can score and the clock is stopped when the wide receiver hits out of bounds at the Buccaneers 2-yard-line.

On first and goal, the Steelers spread out the Buccaneers with two wide receivers on both sides and McDonald tight on the left side of the offensive line. Roethlisberger tried to hit Smith-Schuster on a short out-breaking route to the left flat but Stewart manages to break it up after the Steelers wide receiver bobbles the initial catch attempt. Quite honestly, this should have been a touchdown.

On second and goal, the Steelers get Brown singled up one on one on rookie cornerback Carlton Davis on the left side of the formation. Brown runs a slant and while there was some contact by both players in the end zone, Davis turned Brown enough to get a pass inference penalty called on him. This penalty then set the Steelers offense up with a first and goal at the Buccaneers one-yard-line with 10 seconds remaining.

The Steelers then decide to bring wide receiver Ryan Switzer intro the game for Conner to take advantage of how well he works in short spaces out of the slot. Switzer’s motion out of the backfield not only helped Roethlisberger identify man-coverage, it left the quick wide receiver matched up against Buccaneers safety Justin Evans. At the snap of the football, Brown got a fairly clean release to the outside of Davis and that results in momentary pick of Evans who was attempting to race Switzer to the pylon. Roethlisberger delivered a laser to Switzer and while the wide receiver did bobble the throw initially, he recovered to catch the football for the touchdown with 6 seconds left on the clock.

To recap, the Steelers 9 play, 75-yard scoring drive started with 1:15 left in the half. The entire drive from start to finish used all of 1:09 of clock time and included Roethlisberger completing 8 of his 9 passing attempts to five different players. It really was a masterful drive not only from an execution standpoint, but a play-calling one as well. It’s been quite a while since we’ve seen Roethlisberger lead a drive such as this one right before halftime against the Buccaneers and now the hope is we see a few more of these throughout the remainder of the season.