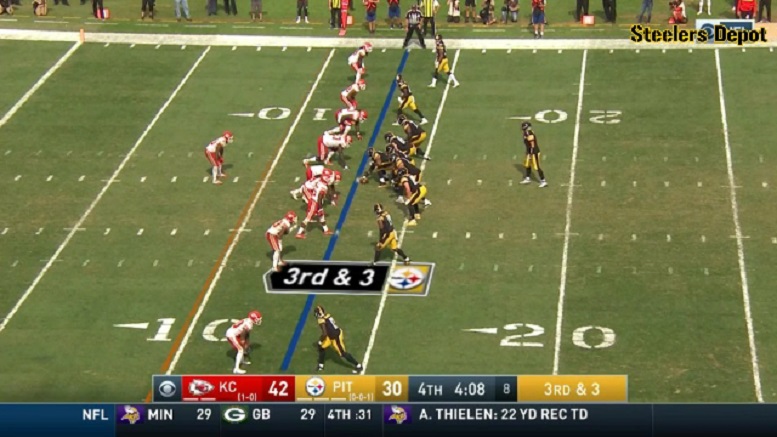 Instead of the Pittsburgh Steelers playing the song “Renegade” from STYX late in games, perhaps they might be better served to play one of the band’s other hits, “Too Much Time On My Hands,” until further notice.

Late in the Steelers 42-37 Sunday home loss to the Kansas City Chiefs, the team’s offense displayed some really poor clock management down 12-points. In fact, if you didn’t know any better, you would have thought Steelers quarterback Ben Roethlisberger and company thought the difference on the scoreboard was just 2-points, not 12.

With 5:03 left in the fourth quarter and the Chiefs leading 42-30, the Steelers offense started its 11th possession of the game at their own 34-yard-line. On first down, Roethlisberger bought some time to his left and ultimately hit tight end Jesse James in stride down the left sideline for a gain of 46 yards before he ran out of bounds to stop the clock with 4:52 left in the fourth quarter.

The Steelers offense having the football at the Chiefs 20-yard-line with 4:52 left on the clock certainly had to give some fans of the team hope that a quick score was going to come and that perhaps a well-timed stop by the team’s defense would then follow, which in turn would leave plenty of time left for Roethlisberger to win the game. Unfortunately, that first score wound up not being quick at all.

After Roethlisberger threw incomplete to wide receiver Antonio Brown on first down from the Chiefs 20-yard-line, the Steelers quarterback then connected with wide receiver JuJu Smith-Schuster via a short pass just right of the middle of the field on second down. Smith-Schuster was tackled with 4:41 left on the game clock and the Steelers offense then proceeded to use up the next 34-seconds before running their third down play, and incomplete pass from Roethlisberger to Smith-Schuster in the end zone.

Had Roethlisberger connected with Smith-Schuster on that throw, then perhaps that wasted 34-seconds wouldn’t be that much of a big deal on Monday. After all, there was still 4:02 left on the clock and the Steelers still had all three of their timeouts plus the two-minute warning clock stoppage at their disposal. However, with Roethlisberger and Smith-Schuster failing to connect on that end zone pass, the offense then needed to make sure to convert a fourth down and 3.

On fourth down, Roethlisberger again connected with Smith-Schuster for a 7-yard gain just right of the middle of the field to move the chains. However, it then took the Steelers offense the next 28-seconds to get their next play run. Why not hurry up to the line and spike the football in that situation? In my opinion, that would have been the appropriate thing to do.

The time wasting, however, didn’t stop there as after Roethlisberger threw incomplete to Smith-Schuster on first down in the end zone once again, he connected with running back James Conner via a short pass in the middle of the field and he was finally tackled at the Chiefs 1-yard-line with 3:16 remaining and the clock ticking. 30 more seconds then ticked off the clock before the Steelers next offensive play was run, which turned out to be another short completed pass to Smith-Schuster that this time lost a few yards and set up a fourth and goal situation.

33 more seconds then ticked off the clock before that fourth down play was run that culminated with Roethlisberger scrambling to his right and diving into the corner of the end zone for a touchdown. While it’s great that Roethlisberger scored on the play, he did so with 1:59 left on the clock and thus the Steelers missed out on having the two-minute warning to use like an extra timeout.

To review, the Steelers offense used up 125 seconds of clock between the end and start of four plays and that’s just way too much. Would having a good chunk of that seemingly wasted time made a difference in the outcome of the game? The way the Steelers defense had played all game, probably not. Even so, at least the Steelers defensive unit may have been given the luxury of being able to allow one quick first down during the Chiefs ensuing possession.

Moving forward, the Steelers offense can’t think that any late-game situation in which they are trailing includes the unit having too much time on their hands and especially if the team’s defense hasn’t provided any, or many, reasons for Renegade to be played during the contest.