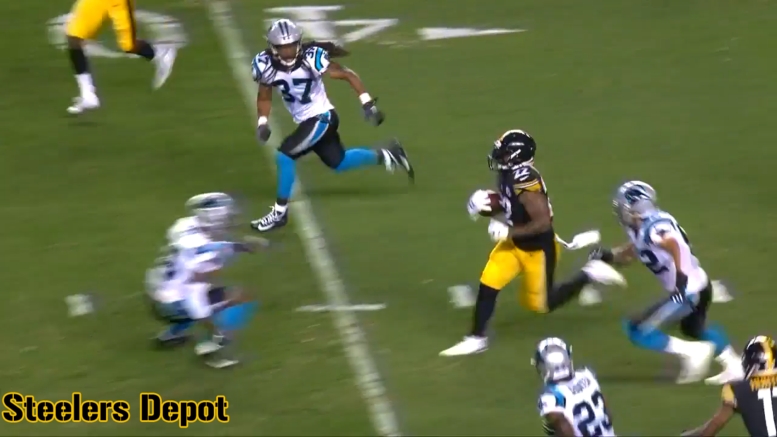 At least for the time being, the Pittsburgh Steelers are choosing to carry three running backs on their 53-man roster who are not named Le’Veon Bell. It is unclear whether or not that plan will change when (or perhaps if) the sixth-year running back chooses to sign his franchise tag and report to the team for the 2018 regular season.

Until he does, at least, veteran running back Stevan Ridley would appear to have a home on the roster, and he owns that role not because of his past pedigree, but because of what he showed the team during the offseason and in the preseason. He only participated in two games due to injuries, but is healthy now and, as Dave Bryan said, “snatching souls”. But we’ll get to that toward the end of this little film session.

Two of the Steelers’ three running backs currently on the roster are very inexperienced. Jaylen Samuels is a rookie. James Conner got 32 touches during his first season last year. So Ridley’s veteran presence is welcome. As is the quickness he displays on runs such as these.

That one went for 17. He picked up 11 yards on another between-the-tackles one-cut burst later in the quarter, once again showing the urgency in his movements that initially attracted the team during his brief appearance with them a year ago.

But he didn’t just make the team for his ability to run the ball. While he is working on improving his work as a receiver (and did so in the first preseason game), he showed in the finale that he is up to the challenge as a pass protector as well.

Here, for example, he was on blitz pickup duty with the Carolina Panthers showing seven players in the box before the snap. After they dropped two potential rushers, Ridley looked for work and helped center Matt Feiler, getting a good punch while not knocking his teammate off the block.

And then there was that soul-snatching incident. Late in the half, on what should have been a touchdown pass, the veteran running back threw a chip against the on-rushing right defensive end that sent him spiraling to the ground.

To give you an idea of how much a tackle appreciates when he gets a chip like that, I present to you Chukwuma Okorafor’s honest to goodness reaction to that play.