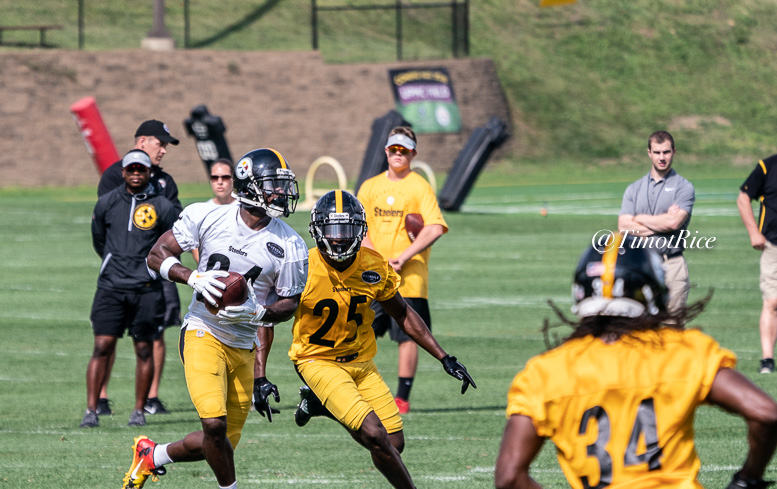 As I’ve harped on the first two days of the 2018 Pittsburgh Steelers training camp, I’ve spent a bulk of this time focusing on where guys are lining up and who is running with what teams. Understand these things are fluid, the team certainly isn’t beholden to any depth chart, but I want to give you an idea of how things generally look right now. We made some predictions before camp and now, we can find out the reality. Here’s roughly how things have gone for each spot.

Again, some mixing and matching especially given you don’t need to get long looks at someone like Jones. We’ll see how well Rudolph does and if he can move up. He’s not in any danger of getting cut, obviously.

This one is a little murky. Conner is most definitely the #1 RB. Beyond that, it’s pretty fluid. Samuels gets a lot of work with the 1’s as a receiver, though not as much as a runner. You could flip him and Toussaint here and I wouldn’t argue with you.

With the ability to run two or three tight ends on the field, this depth chart doesn’t mean as much for the TEs as it does others. But this is the general idea of things. Probably not a surprise to anyone.

They’re going to make Washington earn that starting nod. Washington has mostly been outside but got a couple reps in the slot. Tevin Jones in the slot is a mild surprise, especially with Thomas seeing more time on the outside than expected. Not seeing any of Quadree Henderson in team drills. So I have Griffey doubling up.

This group is solidified and consistent. Collins avoided any serious injury and he’s still with the 2nd team. Rodgers getting 2nd team reps is really important for him. Prince, despite playing mostly guard in college, is at tackle.

Another group that’s fairly consistent, though they mix it up in nickel. The 4th teamers hardly play and are in a rough spot. Sayles sneaks away from them and jumps with the third team.

I had the pairings right, just the wrong sides for 2nd/3rd stringers. Odds are they will flip. But that’s the grouping.

For the 3rd/4th team, I don’t have a feel for who is Buck/Mack. But those are the pairings. With Leslie kicking to ILB, Galambos and Kelsey are struggling for reps.

Pretty consistent looks here. Not much mix/match. Sutton pulls double-duty. No big surprises. Malik Reaves still getting adjusted to the playbook and hasn’t been in team drills.

Marcus Allen feeling like the odd man out as things stand today. But again, lot of time here. Dangerfield down with the 3’s after getting some first team love in the spring. For the 2nd and 3rd stringers, I don’t have a good feel for strong/free. Went with my best educated guesses based on skillset.

Justin Thomas and Quadree Henderson have been used as punt returners.