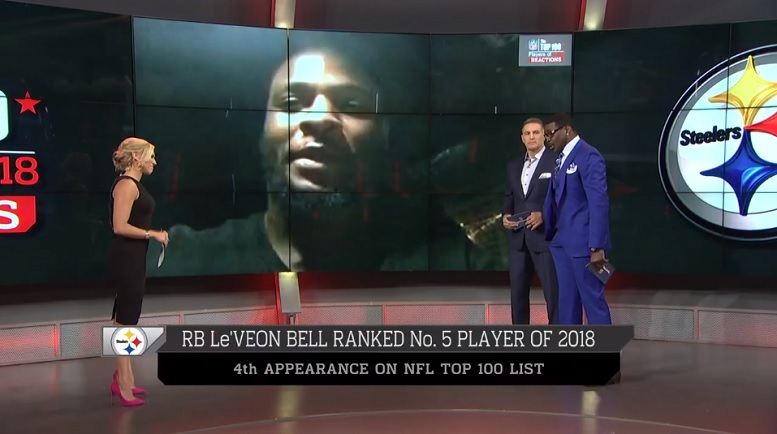 The Pittsburgh Steelers now have a little less than three weeks of contract negotiating time remaining with running back Le’Veon Bell, who is currently wearing the franchise tag issued him back in February. While many fans of the team and most major media and local analysts are in firm belief that the Steelers won’t ultimately get a long-term contract done with Bell prior to the July 16 deadline, the running back said Monday night during an interview on the NFL Network that he’s still very optimistic the two sides will get something worked out.

“We’re working on it,” Bell said Monday night about his current contract situation with a little less than three weeks worth of negotiation time now remaining. “We’re a lot closer than we were last year at this time and that’s what I’m happy about. But none of that matters if we don’t get it done. Hopefully, we’ll try to get something done and that’s what I’m looking forward to. I got confidence we’ll get it done, so I want to do it.”

Bell, who was voted the No.5 player in this year’s top 100 series that the NFL Network runs annually, was then pressed about his optimism concerning his contract negotiations and if he thought it would ultimately lead to him being in training camp this year.

“Yeah, you know, regardless, that’s what I want to do,” Bell told Michael Irvin. “I don’t want to have a replication of what happened last year, but if that came down to that, obviously, I got to do what I gotta do and I’ll take my stand and protect myself. But I don’t want to have to do that and I want to go to camp and play for the Steelers long-term.”

Should the Steelers be unable to sign Bell to a long-term contract extension by July 16, the running back will undoubtedly bypass training camp just as he did last year and probably not sign his franchise tag until just prior to the regular season getting underway.

Last year, Bell’s late arrival was blamed for the Steelers running game getting off to a slow start and Monday night he was asked if he learned anything from that experience that he can apply this year that would prevent another slow start should he ultimately sit out all of training camp and the preseason a second consecutive year.

“I think just getting back in a groove with the offense,” Bell said. “When you’re not there in camp, minicamp, OTAs and things like that, they find different rhythms with different backs that’s in there, or whatever player they put in the spot that I would be in. So, I got to obviously find a way to get back quicker. Maybe taking Ben [Roethlisberger] to the side and literally just me and him one on one, him throwing me the ball. Getting in sync with my olinemen, that’s usually what comes quickest, to be honest, is me getting in sync with my oline, rather than me running routes with Ben. It’s a lot of timing and things like that so I think for me, that was the biggest thing was my timing with Ben and us getting together on the same page.”

Bell is currently slated to earn $14.544 million in 2018 as a result of him being given the franchise tag a second consecutive year. If the Steelers fail to sign their former second-round raft pick out of Michigan State to a long-term contract extension by the July 16 deadline, 2018 is likely to be his last season in Pittsburgh.