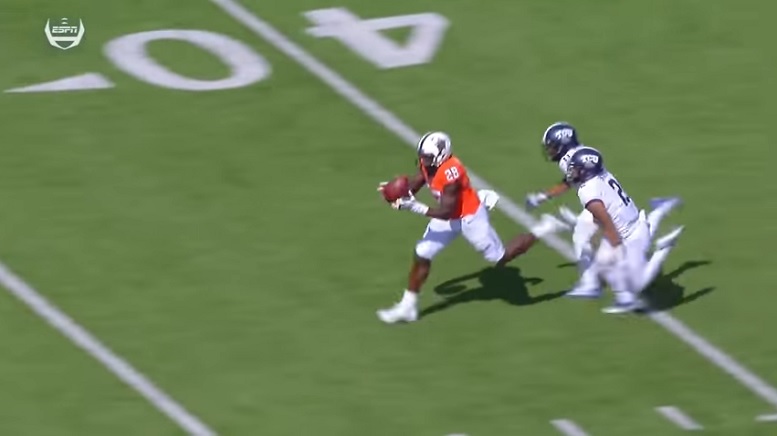 This series of posts will continue now with Rudolph’s fourth game of 2017 against Texas Christian in which he completed 22 of 41 pass attempts for 398 yards and 2 touchdowns with 2 interceptions in that 44-31 home loss.

As far as Rudolph’s deep pass attempts (16 yards or longer) against Texas Christian, he was 4-of-14 for 155 yards with 2 touchdowns and no interceptions. Its worth noting, however, that three of those deep pass incompletions were throwaways. Of Rudolph’s 41 total pass attempts against Texas Christian, one was dropped. Additionally, two registered attempts and completions came on a shovel passes to a running back.

5 of Rudolph’s 41 pass attempts against Texas Christian included the football being thrown at a player who was behind the line of scrimmage as part of a screen, shovel pass, or him being hit from behind and 4 were caught and 1 was intercepted. Those 4 completions resulted in 32 yards being gained.

As for Rudolph’s third down pass attempts against Texas Christian, he was 3-of-7 with five of those attempts being thrown either at the chains or beyond. 2 of his 3 third down completions moved the chains and one attempt, a short dump-off to a running back, was intercepted.

Inside the red zone against Texas Christian, Rudolph was 2-of-6 passing for 27 yards and a touchdown. One of those attempts was inteceptable.

145 of Rudolph’s passing yards against Texas Christian came after the catch.

Rudolph played from behind the entire game against Texas Christian.