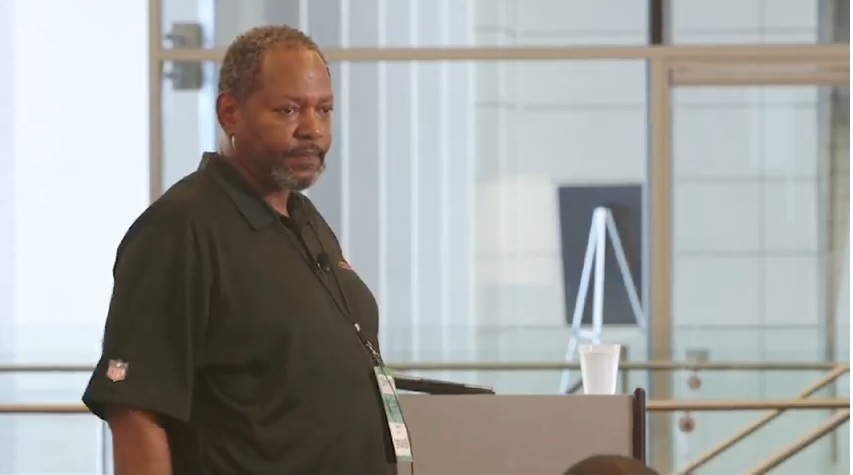 It’s sometimes hard to get a feel for what the Pittsburgh Steelers’ coaches teach. Not a lot of clinic tape out there from Keith Butler, John Mitchell, and the like. But with the hiring of receivers coach Darryl Drake, we have some special insight.

Posted in September, and presumably done over last summer, Drake was a guest coach at a clinic I can’t quite identify. It may have been at Western Kentucky, his alma mater, where he’s been hosted in the past. A series of videos were posted, which we’ll share here. We’ll go through it one-by-one, they’re bite-sized clips, but we’ll offer some thoughts and quotes below.

We’ll begin with Drake’s four principles of playing wide receiver. They are.

Drake talks about his pet peeve – receivers who hold the ball like a loaf of bread.

He said that anytime a player loafed the ball, even if he was by himself racing towards the end zone, Drake would meet the player on the sideline, grab the ball, and “throw it as far as I can. Go get it.”

So clearly, ball security is at the top of his list.

Next up. A broader approach. Putting your players first.

“I always put my players first. Always. Always put them first…when your players still call you and check on you, you know you did something right.”

Drake takes the father figure approach, knowing some of the players he’ll coach haven’t had that person if their life. Drake would go onto say he never thought he would become a coach but now considers it the “greatest profession in the world.”

“We have that opportunity to make a positive impact on a young person’s life. That’s what it’s all about.”

In the next video, Drake discusses what makes a good receiver. He says they never take a direct hit and can contort their body to get out of harms way. He knows it isn’t about the size of the receiver but his ability to run and make plays. Here, he heaps praise on Antonio Brown, who he calls – even while still is Arizona – the best receiver in the league.

“The prototypical guy is between 5’10, six foot, 185 pounds. The best receiver in the league is that size. Plays for the Pittsburgh Steelers. He’s that size. And he’s the baddest dog in the league. Don’t get it twisted. Don’t get it twisted. He is a war daddy. Can do it all. And he’s a gym rat. You can’t get him out of there. But that’s what he is.”

When it comes to catching, Drake said he doesn’t care as much about catching with your hands. His goal is to just make the catch.

“I don’t care if you use your chest. Everybody says catch the ball with your hands. I just want you to do what? Catch it. That’s the bottom line.”

But he emphasizes the need to look the ball in, something he reps by using one-handed catch drills, which forces the player to see the ball in each time.

He even shared the story of an unnamed player who wouldn’t look the ball in and kept dropping passes. So Drake took it to another level and made him catch concrete bricks.

“So I pitched it to him everyday. Everyday, he got used to looking to the ball and catching it. He didn’t drop no balls.”

If you see a cement mixer out at Latrobe this summer, you’ll know why.

“You gotta give to get in any aspect. Give much more of yourself than you expect to get. Treat everyone as a winner and be an example to all.”

Trust, loyalty, and respect also makeup his guiding light. “Honesty and hardwork is our trademark. Encouragement and motivation is our job as coaches.”

Check out all the videos we’ve linked. What the Steelers are getting with Drake is a very similar style – and experience – as they had with Mann. That father figure to lead a still young group. Guys like Martavis Bryant and JuJu Smith-Schuster, still growing and maturing.

Easy to like Drake based off these videos. Equally easy to see why the Steelers wanted to hire him.

Also, I ordered a coaching clinic book with Drake presenting. So in a couple weeks, or during the summer, we might recap that as well. Hope this gives you a feel about who the Steelers are getting.