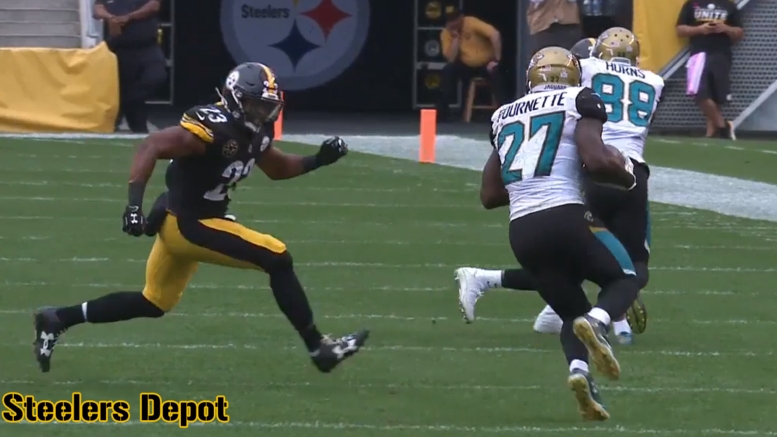 In 13 games during his rookie season, Jacksonville Jaguars running back Leonard Fournette only managed to average four yards per carry or more in four games. He averaged under three yards per carry in more games—five, to be specific—and his season average ultimately checked in just a hair below four yards, which is routinely seen as a standard baseline for rushing success.

He also had just 57 yards on 21 carries in his first career playoff game against the Buffalo Bills, averaging 2.7 yards per carry for his efforts. For a player who found after his first preseason skirmish that the NFL is “a lot slower” than he expected and “really easy”, his efficiency metrics don’t really back it up.

Perhaps that is why he is excited to return to Heinz Field, where he authored the best game of his rookie season against the Pittsburgh Steelers. He averaged 6.5 yards per carry in that game, one of only two games in which he averaged more than 4.2 yards per carry. He rushed for 181 yards and scored twice, and considers his two touchdowns in that game his best plays of the year.

One thing Fournette is not afraid of is a workload. He averaged over 20 carries per game, including the postseason, in the 14 games in which he has played so far. He has authored five 100-yard games, and the majority of them were acts of sheer attrition.

Dave Bryan really dug into the rookie’s numbers for us recently, pointing out that he has had a below-average success rate on his carries all season, with the numbers even trending downward. So in spite of his self-confessed aversion to playing and being tackled in cold weather, he is hoping to find the NFL ‘easy’ again versus the Steelers’ run defense.

Part of that run defense is safety Mike Mitchell, with whom the rookie exchanged some words during the previous meeting. The two were jawing at one another throughout the game, but there was one moment in particular in the fourth quarter, where the running back waved at him after breaking a tackle.

Mitchell didn’t take kindly to that, but Fournette doesn’t chalk it up to an act of disrespect. He called it “competing” recently, and said of the Steelers defensive back, “he’s a great safety and can’t wait to get at it with him once again”.

The ninth-year veteran has managed to rub a number of people the wrong way over the course of the past four years in Pittsburgh, including many in Cincinnati—and for that matter, many in Pittsburgh. But nobody can doubt his passion and dedication.

Mitchell will always speak his mind and will always look to back it up as well. He believes highly in himself and in his teammates, and as a result has a tendency toward claims that teeter toward boasting. He is driven by his competitiveness, and no doubt is looking forward to bringing Fournette down on the cold, hard grass soon.