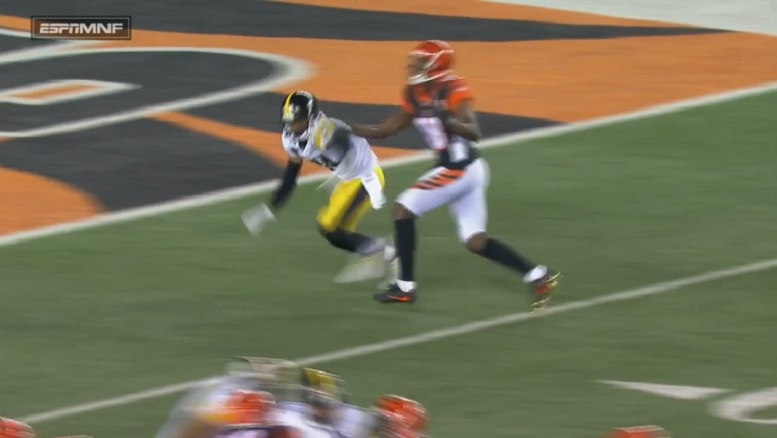 Monday night might have been the last game that Pittsburgh Steelers cornerback Coty Sensabaugh starts for the team until regular starter Joe Haden returns from his fractured fibula.

Sensabaugh, who was forced into the starting role several weeks ago, didn’t play well once again Monday night against the Cincinnati Bengals and that resulted in him effectively being benched at halftime in favor of rookie cornerback Cameron Sutton. After the game was over, Steelers head coach Mike Tomlin was asked about what went into his decision to replace Sensabaugh with Sutton

“You know, we needed a spark, you know,” Tomlin said after the team’s win. “This is a guy that’s worked extremely hard and is deserving of an opportunity. It wasn’t like there was a lot of positive things going on. It’s really no slight against, Coty, man, we were just looking for a spark or a combination. Coty served us well in relief of Joe [Haden]. We gave 34 [Sutton] an opportunity. He made some plays and we’ll see what next week holds for us.”

Sensabaugh was beaten several times Monday night by Bengals wide receivers and especially A.J. Green, who caught 7 passes for 77 yards and two touchdowns in his team’s 23-20 home loss. Sensabaugh has given up several big plays and touchdowns since Haden went down injured with a fractured fibula back in Week 10 and Monday night Tomlin had apparently decided enough was enough.

As for Sutton, the Steelers first of two third-round draft picks this year, he spent the first 11 weeks of the regular season on the team’s Reserve/Injured list with a hamstring injury. He was activated to the 53-man roster ahead of the team’s Week 12 game, but failed to see the field even on special teams against the Green Bay Packers a week ago Sunday.

Will Sutton now start on the left side until Haden returns to action? We’ll see, but Tomlin certainly sounded like that’s a possibility Monday night.