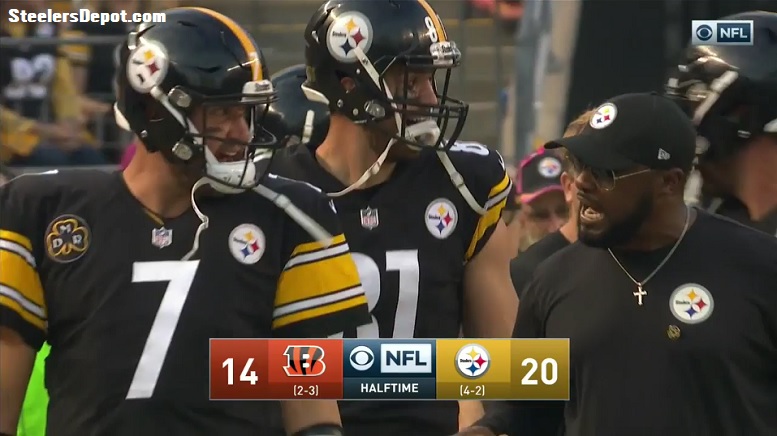 Back at it, breaking down what the Pittsburgh Steelers have to do to win (or lose) in today’s game against the Cincinnati Bengals. My always unreliable prediction at the bottom.

Obviously, the game is tomorrow but without much going on today (and our scouting report up Monday morning), we’ll dive into things now.

1. Someone steps up for Antonio Brown. As of this writing, I am assuming Brown plays. But we don’t know exactly how healthy he is and even someone as good as AB can be hampered by a toe injury. It’s not like you can just throw jump balls to him as if he’s Julio Jones. Whether it’s JuJu Smith-Schuster, Martavis Bryant, someone else, or most likely, a combination of everyone, no one can replace Brown. But they have to come close, especially if AB is on a pitch count.

2. 22 Double wins the day. Staple run against the Bengals. They have to know it’s coming but for years, haven’t been able to stop it. David DeCastro and Roosevelt Nix/Jesse James are going to be some of the biggest keys in making the scheme work but also on the frontside for getting a good double-team and not allowing any penetration.

The Steelers won’t shadow either so it’s a team effort. Coty Sensabaugh, Artie Burns, and maybe even Mike Hilton. Bengals have made a better effort to get him in the slot.

The Bengals Will Win If…

1. Their screen game produces at least one chunk play. It’s 1st and 10 and Joe Mixon gets tackled in the backfield for a three yard loss. 2nd and 13 should put the Steelers in good position, right? Not always. Bengals will use their screen game on 1st and 2nd and long and Mixon is dangerous in space. It’s happened before and he has four receptions of 15+ yards this year. By comparison, Le’Veon Bell has five.

2. Andy Dalton gets time in the pocket. There’s no guarantee the Bengals will give up four sacks like they did in the previous meeting. In fact, it seems unlikely. They’re doing a much better job of protecting Dalton, who has been dropped only four times over the last three weeks. Looking for a big game from T.J. Watt or Bud Dupree. Preferably both.

3. Defensive disguises pay off. I don’t think many teams to a better job disguising their coverages and blitzes as well as the Bengals. In a word, they’re stressful for offenses. What you see pre-snap is usually different than what you get post-snap. That’s not something new for Ben Roethlisberger and company but that doesn’t always make it easier either. One bad read, by quarterback, receiver, or offensive line can lead to disaster. We’ll show some of that in tomorrow’s report.