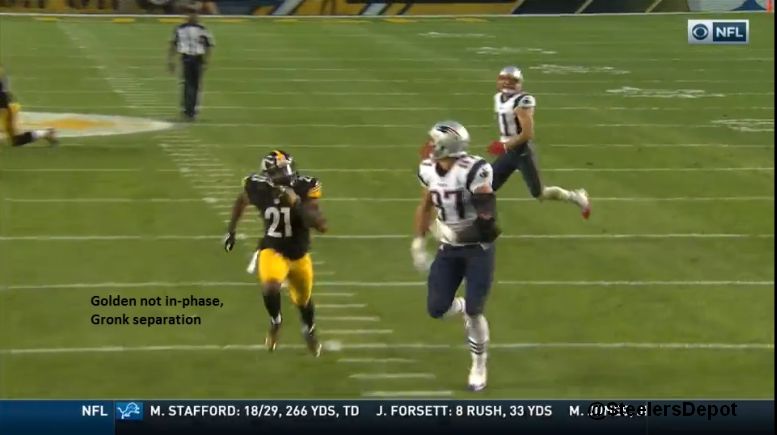 New England Patriots tight end Rob Gronkowski is now back with his team again after serving his one-game suspension last week and thus he should be well-rested for the Sunday road game against the Pittsburgh Steelers. Gronkowski has had quite a bit of success against the Steelers during his career as he’s caught 30 passes for 496 yards and eight touchdowns in five career games against Pittsburgh. So, which Steelers defensive player will ultimately get the honor of covering Gronkowski this coming Sunday at Heinz Field? According to Steelers safety Mike Mitchell, we’re likely to see several different defensive players attempt to cover the league’s best tight end.

“We’ve got several guys we’re going to try to throw (at him),” Mitchell said, according to Jeremy Fowler of ESPN.com. “It’s going to require coaches calling the right calls, it’s going be us executing everything they call to a T. There’s no real one real answer.”

Mitchell is exactly right and knowing the Patriots, they’re likely to use a lot of big personnel grouping packages on Sunday in an attempt to force the Steelers to use their base defense. With inside linebacker Ryan Shazier now out for the season, Gronkowski is likely to have a matchup to his liking on Sunday should the Steelers be forced to use their base 3-4 personnel grouping quite a bit during the Week 15 game.

The Steelers could attempt to use either their nickel or dime personnel grouping regardless of whatever offensive personnel the Patriots decide to utilize and if that’s ultimately the case, then we could see undersized nickel cornerback Mike Hilton attempting to cover the 6-6 Gronkowski some on Sunday.

“Basing off what they do, they try to give you mismatches,” Hilton said, according to Chris Adamski of the Pittsburgh Tribune-Review. “They try to mix it up. And (Tom Brady) is one of the best quarterbacks — if not the best quarterback — to play the game. He will look that way. We know what to expect. It’s just a matter of executing and not beating ourselves.”

Hilton, who has played well in his first full season with the Steelers, sounds like he already has a plan in place should he ultimately be forced to cover Gronkowski some on Sunday.

“I know he’s a physical guy, so I feel like if I use my quickness and not let him get his hands on me, I will be able to break with him and have a chance to make a play,” Hilton said.

As for Patriots quarterback Tom Brady, who didn’t play all that well in his team’s Monday night road loss to the Miami Dolphins, he’s glad to have his top offensive weapon back this week and he talked on Thursday about how the big tight end makes his life as a quarterback easier.

“I mean, hes a great player,” Brady said of Gronkowski. “So, he’s a great matchup for us in the passing game, he’s a great blocker in the run game and his size, speed is good. And so they’ve really got to factor him in. He’s obviously a big part of our offense and gets a lot of targets and he makes a lot of big plays. So, I think when he’s out there, he’s tougher to defend The better players you have the field the tougher it is to defend and Gronk’s been one of the best to ever play at that position. So it’s good for our offense.”

The last time the Steelers beat the Patriots was in 2011 at Heinz Field and while their defense certainly didn’t shut down Gronkowski in that game as he caught 7 passes from Brady for 94 yards, they did manage to keep him from scoring during that contest. If the 2017 version of the Steelers can hold Gronkowski to a very similar stat-line Sunday at Heinz Field, it will go a long way in helping their chances of winning the game.

“At the end of the day, it’s just about getting hands on him and trying to disrupt him as best as possible,” Steelers rookie outside linebacker T.J. Watt said.

Gronkowski enters Week 15 with 55 catches ob the season for 849 yards and seven touchdowns.