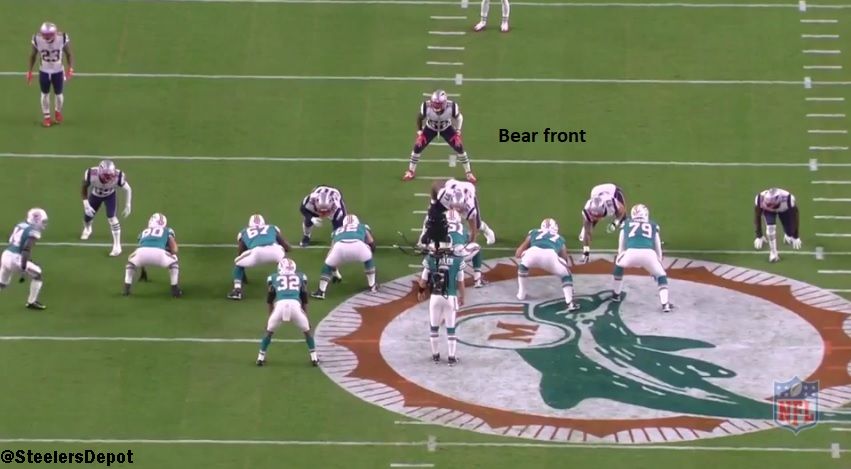 Taking a second look at the New England Patriots’ defense.

The run defense has been middling and could be hurting all the more without Alan Branch, who is beat up right now. On the year, they’re giving up 4.2 YPC (tied for 19th) and allowed 39 runs of 10+. Below average at 18th in the NFL. Ten of those runs have gone for at least 20 years, 20th in the league.

Up front, you can expect #90 Malcolm Brown and if healthy, #97 Branch. If Branch can’t go, UDFA Adam Butler will step in, as he did last week. The Patriots run a hybrid front, switching between a 4-3 and 3-4.

Either way, expect Deatrich Wise at LDE and Eric Lee at RDE. Trey Flowers is hoping to come back, which would be a big boost to their pass rush. Ditto with Kyle Van Noy at linebacker. Off ball has been a mixing and matching. There’s the new, Elandon Roberts, a really athletic linebacker who isn’t having the best season, and David Harris, the steady veteran scooped up when the Jets went full fire sale.

One other note about their front that’s pretty unusual. They run a Bear front with the center and both guards covered up.

On the year, the pass defense looks shaky. But they’ve improved mightily. Look at it this way. On the season, they have allowed 40 passes of 20+ yards. That’s tied for 19th in the league. But since Week 8, they’ve given up only 11 of them tied for the NFL’s best mark. A lot of the other numbers, TDs allowed, completion %, are below average but they aren’t playing nearly as poorly as they were to start the year.

Stephon Gilmore is their top dog and I expect him to follow Antonio Brown all game. He shadowed Devante Parker and Zay Jones, who, uh, aren’t exactly AB, the previous two weeks. Malcolm Butler will play opposite with my man, Jonathan Jones in the slot.

Patrick Chung is as much of an in-the-box-safety as they come while Devin McCourty is strong at FS. In sub-packages, Duron Harmon (#30) comes in as the SS as Chung slides down into the box. #37 Jordan Richards is a joker type who plays in some exotic packages and is used all over the field, even with his hand down, which we’ll show in a moment.

Coverage wise also offers a variety. A lot of single high looks. Cover 1/Robber, Cover 3. Not a ton of two high because again, Chung is going to plant himself near the LOS.

Not a super blitz heavy team but they’ll sprinkle some of it in. Like I said earlier, will do some exotic stuff with Richards. Here he is, a safety, with his hand down coming free off the edge. 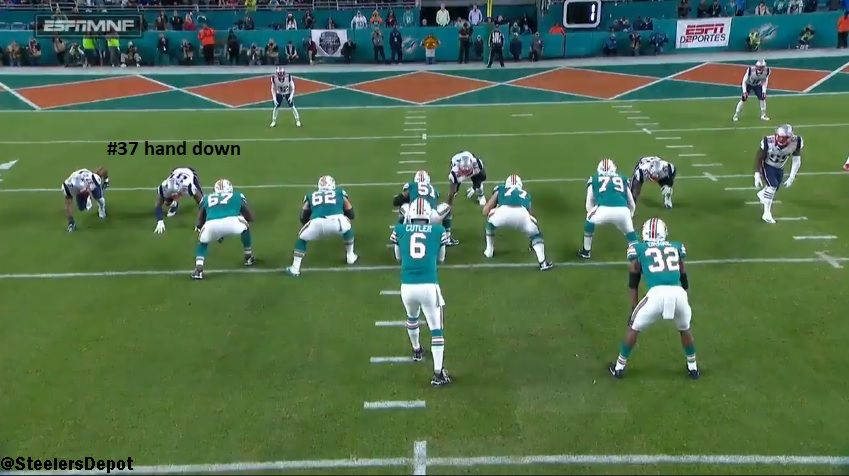 McCourty’s flown in off the edge, too.

One minor thing they do well that a lot of teams, including the Steelers, struggle with, is take over over routes. Those crossers from the other side of the field. They “robot” it and matchup against it well. Overall, they do a nice job of matching up their zone coverage and rarely let guys run free downfield.

Watch the defender come off on #87 to take him on the crosser/dig.

Another unit that moves guys around, we’ll see plenty of options along the line this Sunday. Lawrence Guy is listed as a left defensive end, but he can line up just about anywhere as we’ll see in a few moments. Deatrich Wise Jr., and Malcolm Brown are the interior tackles. And Trey Flowers is the right defensive end. Flowers hasn’t played since week 12, but it looks like he may make his return against the Steelers. This would be a huge boost for the Patriots, as Flowers leads the team in sacks (6) despite missing a few games. Eric Lee has been a recent acquisition from the Buffalo Bills and has been producing quite well given his unfamiliarity with the system and being thrust in mid-season. He is mostly sent off the edge, but will sneak in a drop-back every now and then.  He’s racked up 2.5 sacks over the past three weeks in limited time and situational play.

As far as the other injuries go, it’s a lot of limited participants: Lee, Wise, Flowers. Also defensive tackle Alan Branch did not participate. The expectation is that most of these guys will be ready to go, so the frequent rotations should be anticipated.

But the one “Guy” on this line that I want to talk about is Lawrence Guy. He is a beast off the ball. And I haven’t seen a better example yet than his play against the Bills deep in the red zone. 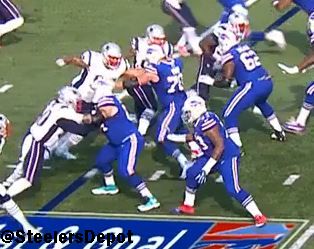 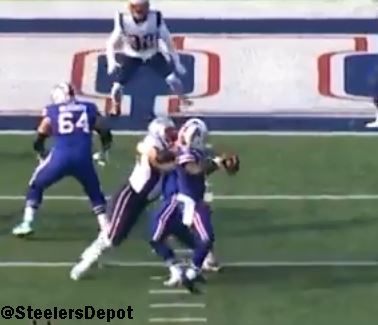 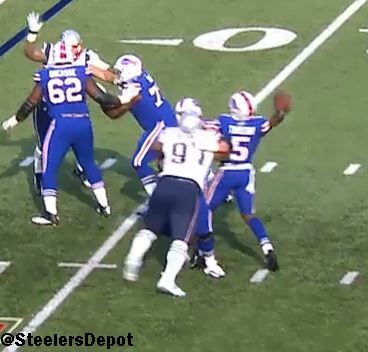 Here he is lined up in a 0-technique position against the Bills. It was an opening drive in which the Patriots got gashed by both the run and the pass setting Buffalo up for a great goal-to-go situation. Guy extends his left hand high up into the breast plate. He uses his free hand to chop the center’s right hand, giving Guy an opportunity to power through attacking at a high pad level and bull rushing his way right into the quarterback. You can see at the end how much leverage he gains with his body lean as well. Oh, and this play forced an errant pass which was intercepted by the aforementioned Eric Lee. Guy is an impressive force along this

The Patriots often tend to use 2 linebackers in many situations, sometimes one. But the starting group will likely be David Harris and Elandon Roberts as the inside backers. Kyle Van Noy is the outside/rush linebacker. Marquis Flowers will rotate in on the outside as well. Harris is typically tasked with following the tight end in coverage, except for when they bring in Patrick Chung, but more on that later. Roberts is best suited as a run-stopper, while Van Noy’s athleticism lends to a variety of options.

New England traded for Van Noy from Detroit, and his production has skyrocketed. He’s used much more as a pass rusher, whereas he was limited in that capacity prior to this season. In doing so, he’s racked up 5.5 sacks and counting. And while the next play I’m going to show you is a sack, it’s more to display his athleticism and cover radius.

Here’s a play versus the Jets in which he’s actually lined up as the mike (a rarity). He’s tasked with reading the quarterback and almost acting as a spy. He moves with the line initially, always keeping an eye on Josh McCown. And as McCown rolls out, Van Noy swoops in, seemingly out of nowhere to make the sack.

His closing speed is impressive, and it shows glimpses of how much space he can cover in a short amount of time. He’s a multi-dimensional piece to this linebacking corps.

This is a unit that can be very dangerous given their overall talent. Malcolm Butler and Stephon Gilmore are the outside guys. Good man corners, who play physical off the snap, they can jam receivers. Butler has good recovery and employs a useful punch similar to that of Charles Tillman.

Check out this play versus Miami in week 12. Butler gets beat inside by Kenny Stills, but he takes the proper angle and you can see him wind up that right arm to swing down and force the incomplete pass. But even a few years ago that very well might have been a fumble.

They rotate in Jonathan Jones, who almost exclusively is used in the slot. But they play around with their safeties as well.

Patrick Chung is the strong safety, and Devin McCourty is the free safety. But Duron Harmon gets plenty of reps in the secondary as well. Chung often lines up in the slot and is heavily used against tight ends. This is when you will see Harmon out there protecting a deep half.

This secondary has grabbed ten interceptions this season, and they’re always a threat for a big play. And with their playmaking safeties, it’s hard to cash in on the deep ball.