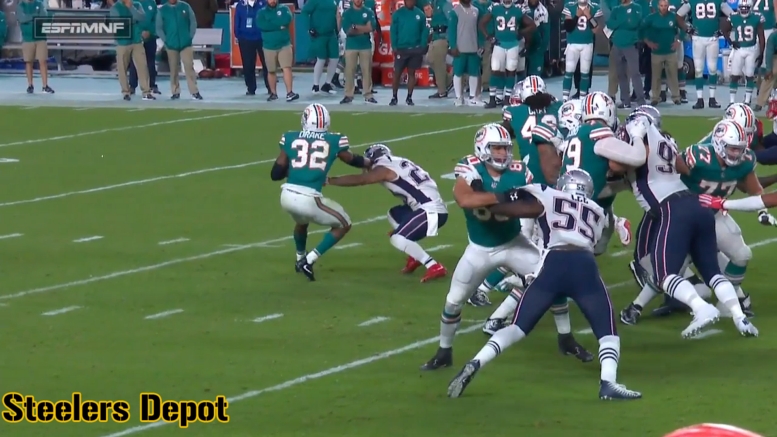 The New England Patriots may not often be recognized for having an excellent defense. Statistically, sometimes, they can even be quite poor. But very rarely do they allow very many points. While an early run of games looked like they may have fallen off a cliff in that regard, they quickly righted the ship and held eight consecutive opponents to 17 points or fewer.

That is until last night, when the Miami Dolphins were able to put up 27 points, all the while squandering further opportunities, including a sure touchdown on a deep throw that was dropped. It was clearly the most vulnerable that they had appeared in some time, and it comes at a good time, heading into the Steel City to face the Pittsburgh Steelers.

The Patriots, even following last night’s game, have still navigated the waters with nearly a top-five defense in terms of points allowed, averaging 19.2 points against per game, tied for sixth-best in the league. That is just slightly better than Pittsburgh, who after allowing a season-high 38 points now average 19.3 points against per game.

The last time a Patriots defense has allowed 20 or more points per game in a season was in 2013. The last time that they ranked outside of the top 10 in scoring defense was in 2011, when they averaged 21.4 points allowed per game.

This season, they have only allowed 20 or more points in a game five times after last night, and they have lost three of those games. One would imagine that the Steelers will have to score more than 20 points to have a hope of beating the Patriots.

The last time an opponent beat the Patriots (with Tom Brady at quarterback) while scoring 20 points or fewer as the Denver Broncos and their stellar defense in 2015 in the AFC Championship game, holding them to 18 points while scoring 20. The Steelers do not have Von Miller and DeMarcus Ware, nor Chris Harris and Aqib Talib, however.

A big piece of the puzzle for the Dolphins to crack 20 points was the running of Kenyan Drake. Even when the Patriots were able to get a man into the backfield, the running back was able to create on his own. The Steelers have such a back in Le’Veon Bell, who has been playing some of his best football of the season in recent weeks.

Another area in which New England’s defense was exploited was in one-on-one coverage matchups. Without a reliable pass rush, Jay Cutler was able to buy time for his receivers, chiefly Jarvis Landry, to beat their man. Well, I suppose Antonio Brown might be able to win some matchups.

Of course, it’s one thing to beat the Patriots’ defense, and another entirely to prevent the Patriots’ offense from beating you. They have only been held to 20 or fewer points twice this season, including last night, and the Steelers’ defense has a number of problems right now.