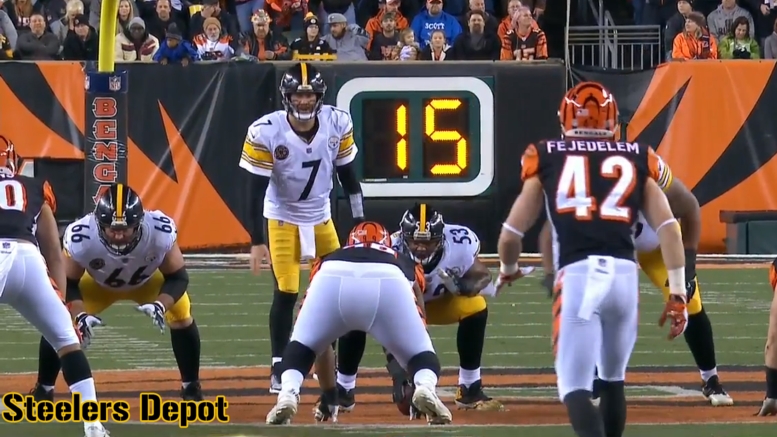 It is very possible that the Pittsburgh Steelers will have to beat the New England Patriots in New England if they want to reach the Super Bowl. That may scare Steelers fans for a number of reasons. One of these reasons may focus on quarterback, Ben Roethlisberger‘s play on the road throughout his career. This year, however, has been different than most for Roethlisberger. Big Ben is enjoying one of his best seasons when it comes to regular season road play. He has especially improved from the last two seasons. The key to this has been better decision making and mental toughness.

With the final game of the season at Heinz Field, here are Roethlisberger’s 2017 numbers away from Pittsburgh. Please note that the numbers highlighted in green represent his best, or tied for best, road statistics in the past three seasons.

The two seasons prior to this one were far from Hall-of-Fame numbers for Roethlisberger. Other than the 70.8% completion percentage in 2015, it is evident that he struggled. Please note that the numbers highlighted in red are alarming, underachieving numbers.

This season has been incredibly better numbers wise for Ben on the road. Taking a closer look, his decision making and ability to bounce back after a single mistake have been vital to his success.

Roethlisberger has historically made mental mistakes on the road that have led to him throwing interceptions. In 2015 especially, he threw 2 interceptions each in games against Seattle and Baltimore on the road (one in each matchup occurred in the fourth quarter). These mistakes greatly contributed to Steelers’ losses.

Keeping that in mind, the mental mistakes by Roethlisberger have been minimal this year. He has not thrown more than one interception in any road game this season. Historically, those mental mistakes constantly led to more soon after, which is exactly what we saw from him when he threw five interceptions this season at home against the Jacksonville Jaguars. Most importantly, not only have zero of those interceptions come in the 4th quarter, but none have come in the second half. Roethlisberger has made mistakes early in road games and then shown enough mental toughness to adjust afterwards. This is an extremely mature, experienced side of Roethlisberger that was not present in 2015 or 2016.

This season has shown Roethlisberger play with confidence on the road. As stated above, he has not forced nearly as many throws as he did the past two years. Offensive Coordinator, Todd Haley‘s conservative play calling is also to thank. Although there weren’t too many signs of success on the road in previous years, this season, Roethlisberger has gotten rid of the ball quicker and hit his open receivers at the right times. The timing on many of his throws has been impeccable. Haley’s game plan (whether you like it or not) and the chemistry that Ben has built with many of his receivers heading into this season are partly to thank.

We can’t blame Ben in full for his poor play on the road in the past. In his 101 career regular season road games, Roethlisberger was sacked 264 times compared to only 215 times in 99 games at home. He has been under pressure on the road and that pressure forced him into making bad decisions.

With that said, he has made poor decisions and has struggled the past two years. This season, he has shown great improvement. Steelers fans can take comfort in the fact that Big Ben has been comfortable this year away from home. That will carry into the playoffs if the situation arises.

Spoiler alert: It probably will.