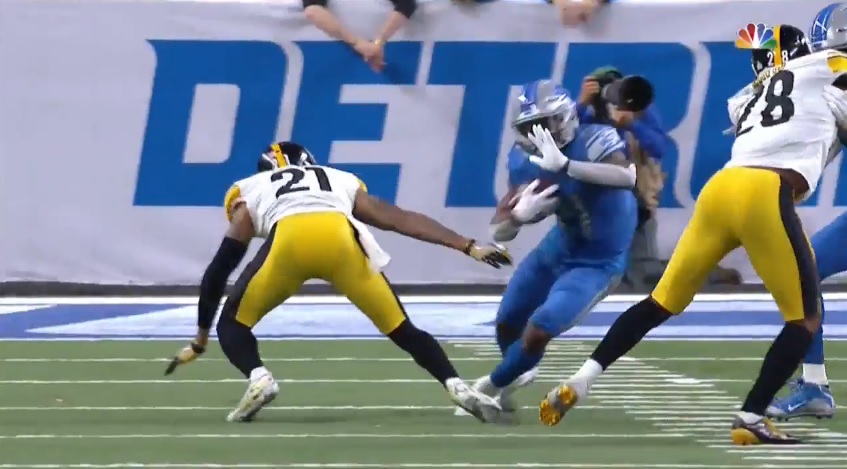 The Pittsburgh Steelers sure had their struggles throughout Sunday night’s game on Sunday Night Football against the Detroit Lions, highlighted by red zone ineptitude and the pass defense, but what might have gone overlooked throughout the game was the dreadful tackling.

Against the Lions in Ford Field, Pittsburgh really struggled for the first time in a few weeks with some egregious missed tackles as guys like Sean Davis and Mike Hilton — despite making plays all night — really came up small in the tackling department.

Although a win is a win and Sunday night’s win was a positive note to head into the bye week on, it’s time to take a look at the missed tackles from the game in Detroit.

Based on the list above, the Steelers welcome two new players into the top three for missed tackles on the defense as Davis and Hilton jumped ahead of Vince Williams with Sunday’s performances.

Ryan Shazier continues to lead the way, while TJ Watt kept his streak of at least one missed tackle in every start alive, but overall that list doesn’t seem super surprising to me.

For all the crap Davis gets on this defense, it seems to be for his inability to force turnovers, rather than missed tackles. If there’s one complaint about Davis that is even remotely valid, it’s the missed tackles, considering he lives in the box. I still think Davis was good on Sunday, even with the four missed tackles. He broke up a few key passes and made some plays near the line of scrimmage.

Anyway, time to break down some of the worst misses from Sunday’s game.

Ameer Abdullah is a very shifty running back, and he proved that again on Sunday in the first quarter, shaking Haden in the open field, forcing Haden to grasp at air. I do like the way Haden came downhill to the line of scrimmage, but I’d like to see him stay on his feet to try and make this play.

To be fair though, I think Abdullah does this to most defenders in the open field.

Yes, this play went for just one yard on the stat sheet, but this is one of the plays that Davis simply whiffs on. Earlier in the game, Davis whiffed on a similar play, so the Lions went right at him again with Theo Riddick in space on a swing pass.

While Davis does a nice job of dropping off of coverage against the tight end, he flies up on the route to try and stop the shifty Riddick one-on-one in space.

Riddick sets him up with the quick stab with his outside foot towards the sideline before then shifting his weight back to the left quickly, causing Davis to get just a fingertip on Riddick in space.

Thankfully, Williams is there to clean up the missed tackle for just a 1-yard gain.

On the Lions’ final drive of the game, Detroit gets off to a fast start with a short throw across the middle from Matthew Stafford to Marvin Jones Jr. Following the short catch, Jones Jr. gets Hilton to miss in space before then pulling off an incredible spin move while off balance, forcing Watt to record his lone miss of the game.

It’s important to remember with this that Jones Jr. is paid to make plays himself, and that’s just what he did here. It’s hard to fault Watt here with the miss because he has an off-balance Jones Jr. lied up dead to rights.

That’s just an incredibly impressive spin move with one leg on the ground. Take your hat off and hand it to Jones Jr. on this play.

Overall, the tackling wasn’t anywhere near good enough on Sunday night, but fortunately for the Steelers, the Lions’ red zone incompetence and a few key defensive plays along the goal line allowed them to hang on for the win.