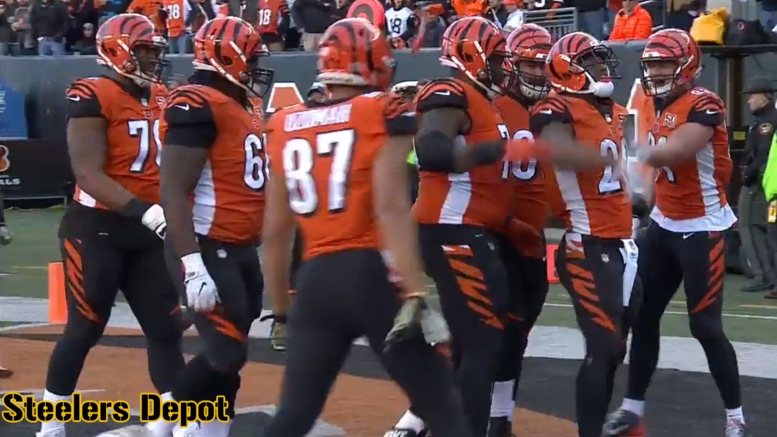 Believe it or not, but the Cincinnati Bengals are still pretty much in the thick of things in the AFC, at least for a Wildcard spot. While they can still technically win the division, it would basically require them winning out and the Pittsburgh Steelers, now at 9-2, losing out.

Following yesterday’s victory over the Cleveland Browns, Cincinnati is now 5-6 on the season, which is just a game behind the Buffalo Bills right now for the final Wildcard spot. The Bills still have to play the New England Patriots, twice, and to be frank, they’re not winning either of them.

They still have plenty of competition, however. The Chargers and the Raiders in the AFC West are both 5-6 right now, with the Chiefs, leading their division, sitting at 6-5. And the Baltimore Ravens, who play tonight, are 5-5 and could be 6-5.

But the Bengals really haven’t been very good at all this year, overall. Two of their five wins now have come against the Browns, who have lost seven consecutive games to their intrastate rivals. Even the articles from the beat writers after this game cast the win as a needed elixir to cure a number of ails.

And that next week’s game will need to be completely different in order to pull off a win, since the Bengals will be hosting the Steelers next week. Of course, Pittsburgh didn’t look like a team that could beat many others last night, either. At least the defense didn’t.

The Bengals won by two touchdowns, yet they knew that it wasn’t even nearly that strong of a win. Just take a look at how they talked after the game about the result. “If we are going to get to where we want to get to, we can’t have games like we did today”, George Iloka told reporters. “Hats off to our offense for stepping up today and doing what they did. But when we play better teams, defensively, that’s not going to cut it.”.

I’m sure the Steelers’ defensive players were saying similar things last night after the game, especially given the fact that they were playing a backup at quarterback and against a third-string running back, even if the Packers have among the top wide receiver groups in the league by a comfortable margin.

Now, the Steelers have about as good a record against the Bengals in recent years as the Bengals have against the Browns. But it would only take one game to change things. And Pittsburgh doesn’t want to misstep at this point.

Meanwhile, the Bengals are just hoping to finish the season with as many wins as the Steelers have now, and maybe the sixth seed.