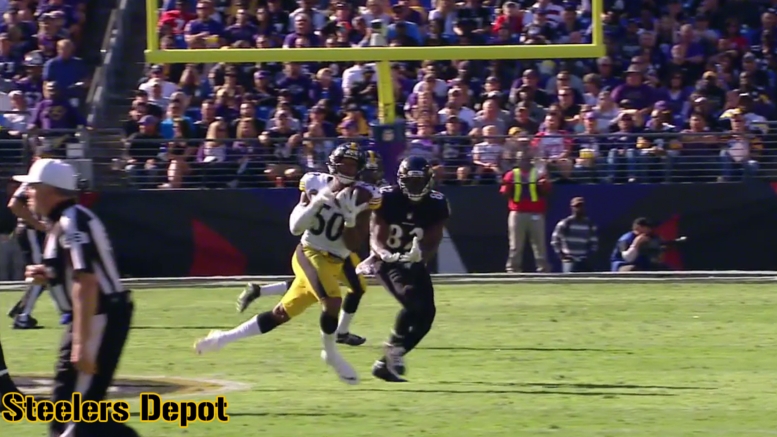 If Cameron Heyward is not the most valuable player on the Steelers’ defense this year, than Ryan Shazier is. He leads the team and is on pace to blow past his previous best with 64 tackles halfway through the year. He has also forced a pair of fumbles and intercepted two passes while recording eight passes defensed.

The only thing really that he has not done yet this year is register a sack, which is odd, considering that he has had three and a half sacks in each of the past two seasons. And to be clear, that is not to suggest by any means that he has not been an effective blitzer this year. He has, and he has gotten pressure.

Shazier brings to the table a skill set that very few in the league could even hope to match, offering unparalleled speed for the position from sideline to sideline with the power to also take on blockers, which has grown over the course of his four-year career, and which we are seeing more of in 2017 in particular.

The big story of the first half of his season, though, is pretty simple. He’s been healthy. I think he has literally missed one snap the entire year, coming off the field for one play late in the fourth quarter against the Ravens when he got nicked up.

In fact, including the postseason, Shazier has now played in and started 20 consecutive games dating back to the middle of last season, which is a pretty big deal, if you consider his prior injury history—which is always the part of the conversation whenever he is being discussed.

It wouldn’t be accurate to suggest that he has been flawless-far from it—but he has been one of the biggest assets on the entire roster by far. That said, there is room for improvement.

Earlier this year, Keith Butler said that he wanted Shazier to stop guessing and start anticipating. He does take gambles, and they don’t always work, and sometimes lead to big plays. He also misses a lot of tackles—many of which, to be fair, most wouldn’t even be in a position to attempt. But on the flip side, he also has five tackles for loss.