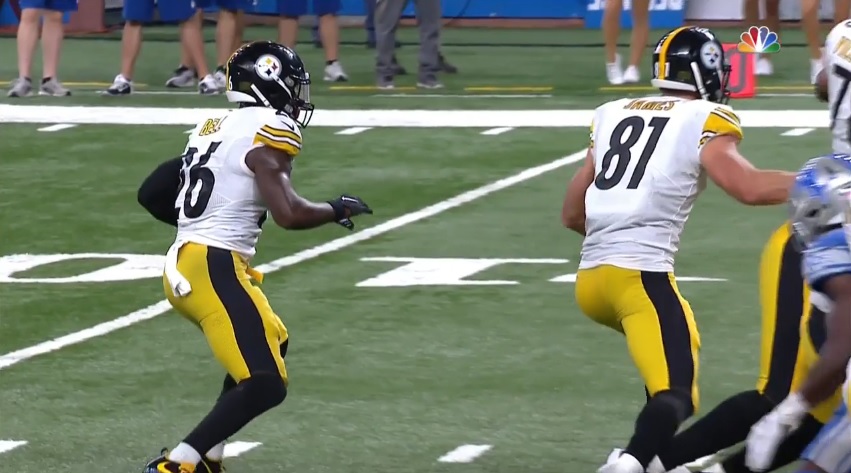 It wasn’t pretty at all, and a lot of luck was needed Sunday night in Detroit, but a win is a win as the Pittsburgh Steelers picked up a big 20-15 win on Sunday Night Football, improving to 6-2 on the season.

The defense consistently bent on the night, but they didn’t break, which was fortunate for the Steelers as the offense had some serious woes of their own. But 6-2 is 6-2 in the NFL, and the Steelers have a chance now to get healthy during the bye week before playing most of their remaining eight games at the friendly confines of Heinz Field.

Like I do each week, I’ll take a shot at grading each position group following the performance against the Lions.

I know most readers will probably have an issue with this grade, but Ben Roethlisberger undoubtedly left a ton of plays out on the field Sunday night in Detroit.

While the veteran quarterback finished with 317 passing yards, one touchdown and one interception, he missed on a number of throws, highlighted by a missed throw to a wide open Darrius Heyward-Bey in the end zone and a wide open Jesse James in the middle of the field one play before JuJu Smith-Schuster’s 97-yard catch-and-run.

Roethlisberger continues to struggle with touch and accuracy, especially on deep shots down the sideline, but when Roethlisberger and the Steelers needed to make plays offensively, he made them.

The interception in the first half was ugly and was a staple of Bad Ben on the road, but he was good enough to win on the night on the road in a game the Steelers had to have heading into the bye week.

Le’Veon Bell had a heavy workload once again, receiving 27 touches (25 carries, 2 receptions) on Sunday night, but Bell struggled to really get going on the ground against a fast, athletic Lions front seven, finishing with just 75 rushing yards and one touchdown (3.0 yards per carry).

A lot of Bell’s struggles on the ground weren’t all his fault, considering the Steelers’ offensive line didn’t really get a chance to run its trademark counter trey on the night against an even front, but when the Steelers had to, the were able to run the ball in tight spots.

Bell did fumble for just the third time in his Steelers career on the night, but overall he gave the Steelers a balanced attack, keeping the Detroit defense honest against the run throughout the game.

JuJu Smith-Schuster now owns the city of Pittsburgh, and Martavis Bryant might never forgive himself of his keyboard warrior tactics.

In his first game as the clear No. 2 receiver, Smith-Schuster went off for the Steelers, hauling in seven passes for 193 yards and one touchdown, which was also the longest play in Steelers’ history. Not bad, eh?

Smith-Schuster did have a big drop on a third-down play, but he redeemed himself late in the fourth with two big third-down conversions to help seal the win.

Antonio Brown had a mostly quiet night matched up against Darius Slay, hauling in five passes for 70 yards. Brown did have a touchdown negated by an offensive pass interference call, but he had a great catch down the field late in the first half, setting up Bell’s touchdown to send the Steelers into the half with the lead.

Eli Rogers had a massive dropped touchdown on the Steelers’ first drive and never really saw the ball again, aside from a pass interference drawn on Nevin Lawson, giving the Steelers a key first down.

Darrius Heyward-Bey found himself wide open in the end zone in the first half, but Roethlisberger missed him big-time.

Jesse James came through big again for the Steelers when they needed him most, stepping back into the No. 1 TE role with Vance McDonald inactive with a knee injury. James hauled in two passes for 42 yards on three targets, including a career-long catch-and-run of 32 yards.

Xavier Grimble continues to impress me as a blocker, having stepped up in the last two weeks to serve as an in-line blocker for the Steelers with McDonald banged up. He could start to see more offensive playing time with his renewed want-to when it comes to blocking.

Not the greatest performance for the Steelers’ starting offensive line in terms of the run game, but the starting five didn’t allow a single sack on the night.

Yes, the 2.6 yards per carry by Pittsburgh on Sunday night wasn’t good by any stretch, but the Steelers have historically had issues running against even fronts. What’s important is that the starting offensive line kept Roethlisberger clean for the most part on the night, and reserve tackle Matt Feiler did a nice job taking over for Chris Hubbard, who left the game to be evaluated for a concussion.

Yes, the Steelers didn’t get much of a pass rush on the night, but the defensive line more than did its part against the Lions, chipping in to hold the Lions to just 3.2 yards per carry, negating Ameer Abdullah out of the game early.

Cam Heyward continues to have a monster year, finishing with three tackles, two tackles for a loss and one sack, while Tyson Alualu came up with a big stop on fourth and goal, taking down Matthew Stafford on a goal-line stand.

And let’s not forget about Javon Hargrave, who single-handedly blew up the Lions’ final offensive play of the game in the red zone, driving Travis Swanson straight back into Stafford to force a bad throw that fell incomplete, giving the Steelers the ball to try and kill the clock.

LT Walton also showed up in a big way on Sunday, showing off his uncanny motor time after time. That seems to rub off of on the rest of the group as the hustle and want-to has been off the charts from this unit.

As I said earlier, there was very, very little pressure applied on Stafford by the Steelers, namely the pass rush, which is discouraging, considering TJ Watt and Anthony Chickillo were matched up against Brian Mihalik all game long.

Bud Dupree was pushed up the arc far too often against Rick Wagner, which is something that has become exceedingly frustrating with Dupree, and I’m not sure James Harrison even received a snap in the win.

Middle linebackers Ryan Shazier and Vince Williams had outstanding nights, combining for 15 stops, none bigger than Williams’ two stops along the goal line to keep the Lions out of the end zone.

This group was picked apart all night long by Stafford, but much like the rest of the team, they made plays when they needed too, which is all you can ask for in an ugly game like Sunday night’s.

Artie Burns was soft in run support at times and was beat deep on Detroit’s first offensive series by Marvin Jones, while Joe Haden struggled in Cover 2, allowing receivers to get behind him and take advantage of the hole down the sideline for some big plays.

Mike Mitchell left with an ankle injury and never returned, but prior to that the Lions went right after him in pass coverage, hitting for big plays all over the field.

Sean Davis continues to be a solid safety for the Steelers, making plays left and right, saving two touchdowns on the night by breaking up a touchdown catch to Darren Fells and blowing up Dwayne Washington in the hole.

Robert Golden and JJ Wilcox were mostly quiet in relief of Mitchell and Davis at times.

Mike Hilton in the slot was outstanding once again, blowing up a couple of run plays along the line of scrimmage, proving just how valuable he has become for the Steelers’ defense.

I drop this grade down to an A- because Chris Boswell banked his lone field goal in off the right upright. Yes, it went in, but it wasn’t his best kick and he got a bit lucky with the deflection off the upright.

Punter Jordan Berry continues to be super solid with booming kicks and directional punting, which helped take Jamal Agnew out of the game for the most part. Berry averaged 47 yards per punt on four attempts, downing two inside the 20-yard line.

The Steelers didn’t get a chance to return a kick or a punt on the night.