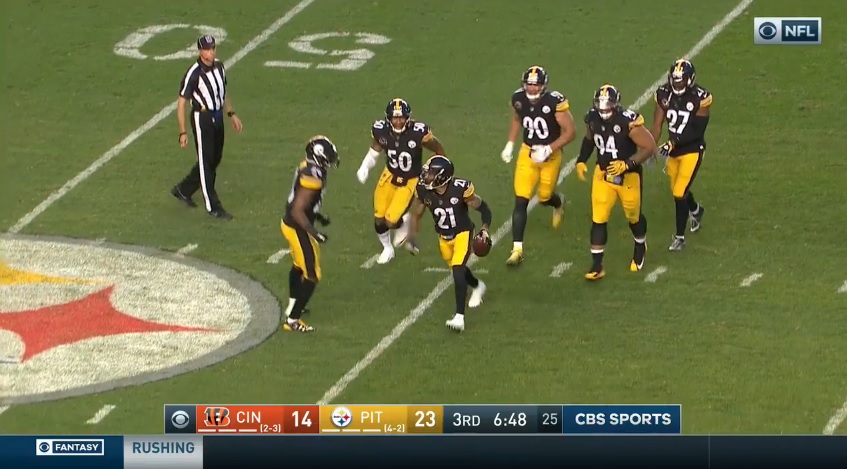 In non-Martavis Bryant news, the Pittsburgh Steelers won yesterday. That’s something that’s been forgotten about the last two weeks. The victory in thanks to a dominate second half defense that held the Cincinnati Bengals to 12 net yards. Although he’s only been with the team for a short time, Joe Haden believes what the Steelers’ defense is doing is special.

Special is the term he used speaking to reporters yesterday.

“I think we can be special,” Haden said via Steelers.com’s Mike Prisuta. “We have the players at every position. As long as we just keep wanting it, keep wanting to be hungry for it and never getting satisfied, and I don’t feel like we have that in this room.”

Haden notched his first interception as a Steeler yesterday. And as I noted in my Stats Of the Weird, it’s the first time in nearly three years Haden intercepted a pass in a game where his team won. And the Steelers sit at 5-2, three games over .500, something that happened only once in his entire career with the Cleveland Browns.

It was a secondary that shut down, not just slowed down, but shut down, A.J. Green, holding him to three nondescript catches. With Green out of the picture, the Bengals’ offense had no one else to turn to, they went into a shell. Sean Davis had his best game in the NFL while Mike Hilton continues to be a steady, physical presence and Mike Mitchell patrols things over the top.

A big change between halves, perhaps we’ll delve into this more in a future post, was communication. The Bengals picked up 14 points on the Steelers early on but according to most in that locker room, it was a product of the Steelers beating themselves. Several, including Haden, said communication was poor and once that got cleaned up by halftime, Pittsburgh was back to their dominant selves.

On the day, they dropped Andy Dalton four times and picked him off another two. Things got so bad that Dalton threw the football away on a 4th and 3, one of the most comical plays of the season and a clear sign of frustration. The Steelers’ defense had broken the Bengals will.

That’s pretty special. Like the way this defense can be.