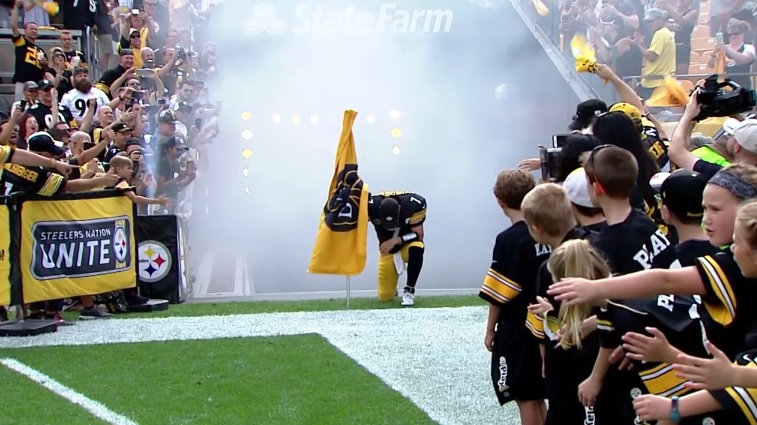 Home openers are always special days. But yesterday in Pittsburgh had extra meaning. It was the first game without Dan Rooney, who, born in 1932, had been alive to witness all 1236 games in Steelers’ history. While the day was somber, it was a one which deserved celebration. The team, as they will all year, wore DMR patches on their jersey. Rooney was featured on the gamebook, past players like Joe Greene and Franco Harris attended, and Ben Roethlisberger ran out of the tunnel waving a flag bearing his initials.

After the game, Roethlisberger was asked about the emotions and meaning of the day.

“Probably not with words,” he said when asked to describe what Rooney meant to him. “He was a grandfather figure to everybody. He just treated everybody the same. It didn’t matter who you were, where you came from, what you did. Everybody was important to him. Always had time to shake your hand, look at you, talk to you. Obviously, he drafted me. Took a chance on me. I know he went in that draft room and said, ‘we’re not passing him up.’ I know I wouldn’t be here if it wasn’t for him. Just a lot of love for him and the family.”

As the story goes, Bill Cowher wanted to draft guard Shawn Andrews. But Rooney intervened, something the family rarely did, and convinced Cowher to take Roethlisberger.

From Rooney’s book via Ed Bouchette and the PPG.

“But when our turn came, I couldn’t bear the thought of passing on another great quarterback prospect the way we had passed on Dan Marino in 1983, so I steered the conversation around to Roethlisberger. After some more talk, we came to a consensus and picked Roethlisberger.”

Clearly, one of the best decisions the franchise mas made over the last three decades.

Roethlisberger said he was more than happy to run out of the tunnel with the flag even though Art Rooney II was adamant he didn’t want anything that would distract the team. Initially, Roethlisberger said the plan to wave the flag was nixed until Ben brought it back up on Saturday.

“Art was just nervous that it’d be a burden to me or whoever would carry it. I was like, ‘absolutely not. It would be an honor to honor him.’ I just think it was very appropriate.”

With the win, the Steelers gave Rooney II the game ball, who said he would pass it on to Dan Rooney’s wife, Patricia.

Steelers beating the Vikings. Just like their first Super Bowl in 1974. I don’t think Rooney would want it any other way.