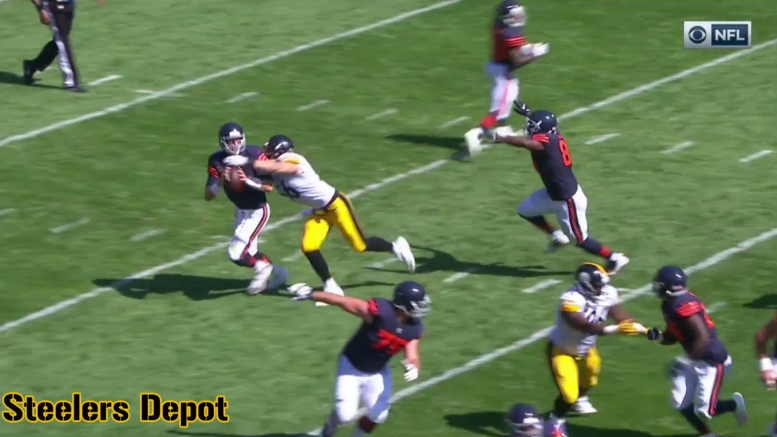 In spite of the fact that he has played a tremendous amount of snaps this season, somehow we have not yet done up a film room taking a look at third-year outside linebacker Anthony Chickillo, who currently leads the Pittsburgh Steelers with three sacks, notching the tie-breaking sack on Sunday against the Vikings.

The former sixth-round draft pick has ascended in the ranks to become the team’s first edge defender off the bench in the early portions of the season, and it certainly has not been unjustified, as he has played well, though not without his mistakes. After not missing any tackles last year, for example, he is beginning to pile them up.

For the moment, however, I would like to focus on some of the things that Chickillo did as a pass-rusher, because it is something that he has really built on over the course of the three years that he has been here. It probably helps that this is the healthiest and fittest he has been, but it does show in his agility and explosiveness.

Of course, he not only has skills as a pass rusher, he also has a good feel for the game, and I liked this early example of him feeling out the screen pass to his side of the field and trying to get his hands up to disrupt it.

Chickillo notched his sack on the first play of the second quarter. Off the weak side of a two-tight-end set, the Bears evidently thought that they would be able to pull their outside tight end on the far side of the formation all the way across the field to pick up the edge rusher, all the while Mike Glennon turns his back for some play-action action. Yeah, didn’t work out.

Early in the second half, both edge rushers were able to get around the corner on a third-and-long passing play, Chickillo set up from a wide stance. He was able to use his inside arm to create distance as he worked up the arc and into the backfield.

Late in the third, he presented a coverage look well enough to get the tackle to bite, rushing late and forcing the lineman to scramble in recovery. He ended up bulldozing the tackle into Glennon as he threw, but not before getting off a successful pass.

It seems that left tackle was starting to get tired of having to deal with Chickillo, though, because toward the end of the game he started just holding to combat him. He held twice, one of which was called. The more blatant one was not. On this play, he literally tugged the outside linebacker down by grabbing his arm and pulling.

You can argue all you want about the officials throwing too many flags, but personally, it doesn’t matter to me how many flags there are as long as the right calls are made. At a bare minimum, all blatant penalties should be called, and this is tantamount to a patently unfair act.