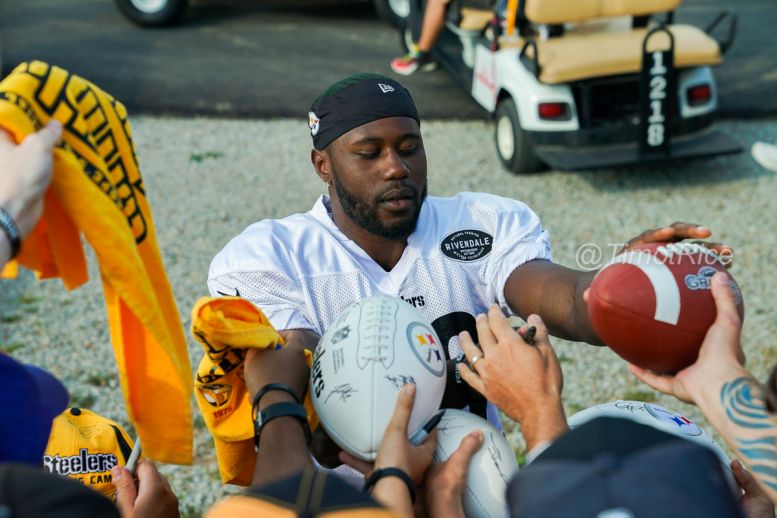 Back at training camp for the first post-game Pittsburgh Steelers’ practice of St. Vincent. I am assuming the intensity of practices will be way down from here on out, this is the final week, but there’s still plenty to watch for.

Is Landry Jones ready to go? Charlie Batch said Jones went through an intense workout pre-game so he’s gotta be close to a return.

You would expect a guy like Josh Dobbs to have a really strong finish to camp. To get into a stadium, manage the noise, command the offense, going back into sleepy Latrobe should be a cakewalk. So expectations raise these final few practices.

Think it’s pretty clear Terrell Watson has jumped Brandon Brown-Dukes and Trey Williams (who I think was hurt and didn’t play Friday). So the focus is on Watson, who looks like a shoe-in for a practice squad spot right now. The next step, and it would be a HUGE leap, would be to push for a 53 man roster spot. Highly unlikely but hey, shoot for the stars.

Jake McGee put on a show as a run blocker. In camp, he showed good hands and the ability to make contested grabs in coverage. Won’t make the 53 but he is a contender to push Phazahn Odom for their practice squad spot. Odom has to make some plays in the passing game.

I am assuming JuJu Smith-Schuster will not practice after suffering a concussion early in the game. We’ll see if Sammie Coates, who looked fluid in the last practice, comes off PUP.

The elephant in the room is seeing Martavis Bryant on the field. I’m sure it’ll be all positive in his performance. But boy, it’s going to be a lot of fun to watch. You know Ben Roethlisberger has been itching to throw a go ball to him.

Canaan Severin didn’t have a great game after stringing together a couple of solid practices leading up. He needs to, at the least, continue that hot streak in Latrobe to stay afloat.

Jerald Hawkins seemed to struggle Friday and really, all of camp. Maybe a short rest, getting to clear his head, will do him some good. At this point, he is definitely not the first tackle off the bench at either spot. That’s still Chris Hubbard.

Guys who got the short end of the snap stick Friday: Ethan Cooper and Jake Rodgers. Only a handful of snaps. That’s unlikely to change going forward, at least until the final game, so what they do in camp is even more important.

That last statement about the third teamers can apply to the DL, too. Christian Brown and Francis Kallon didn’t see the field until the tail end of the game. Unfortunately for them, reps have been hard to come by in practice, too.

Elsewhere, I think this group is fairly settled in. Want to pay closer attention to Johnny Maxey, who seemed to have a good game at 2nd team RDE. Run defense was impressive.

Who’s healthy? If there’s no status change here, you have to think the Steelers make a roster move. What is Bud Dupree’s status? Oddly on again, off again, which isn’t a comforting thought after what happened last camp. Also have Keion Adams (left shoulder) and Anthony Chickillo (hip) who missed the Giants’ game.

Keith Kelsey and to a lesser extent, Matt Galambos had good performances Friday. Let’s see them continue to duke it out for a practice squad spot. Have to think only one will be kept.

Brian Allen continues to show improvement. Hope that carries over into practice as he looks to round out the edges. Brandon Dixon had a rough game and has to bounce back. Greg Ducre disappointingly didn’t play at all on defense, only logging three snaps on special teams. JaCorey Shepherd has apparently jumped him. When this group gets healthy, someone – Ducre – could get cut.

Speaking of health, of course, eyes glued on the status of Artie Burns, Cam Sutton, and Senquez Golson. My guess? None of the three practice today or tomorrow. But just a guess.

Not much going on here either. Health wise, we’ll check in on Mike Mitchell and Sean Davis. If they don’t go, more reps for Jacob Hagen, Terrish Webb, and Malik Golden, all three who seemed to hold their own in-game.